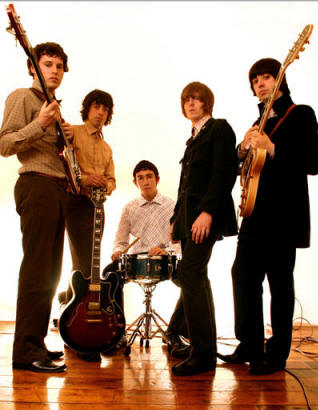 Review Snapshot:
Energetic-sexual-psychedelic-rhythmical-trance, a powerful fusion of groove and youth, or just another modern reworking of old standards? I suppose it depends on your point of view. Me I dug this gig, impressed by how far the band have come, the new found touch of humility, and some amazing tunes. A manic front man, a pounding rhythm section, jolted lead guitar and the odd swirly organ. All in all a good gig.

Full review:
Liking this gig was a simple thing, you either did or you didn't, or, to put it a little better: you'll either get this band or you won't. If you're the type to sit back and tap your foot, to be cool, and to analyse, then you could easily cast aside the Urges, classify them neatly under some pseudo-NME tag, (retro-rock, kinksesque-mod?) and forget about them forever. But you'd be missing out.

The Urges aren't about cool current trends and fancy notions; they know what they like, indeed what they love, and they serve it up neat. Raucous R'n'B, a dash of the mod, primitive garage blues? all tinged with psychedelia and laced with sex. True, some tunes lack originality and drag a little, but that's ok (for now), and besides those tunes seem to be growing fewer by the day.

You might say they sound like the Kinks, the Who, the Stones or one of a dozen tracks from Nuggets, but if you do, so what? You can't see any of those bands live (unless in some reincarnated farce) and we're young, this is a gig, we want to groove, to dance.

A girl I talked to at the gig compared it to a Quentin Tarantino soundtrack, and I think that's pretty apt. Sure Tarantino pays homage to his idols, his films "borrow" heavily from a host of others, but so what? They're great; I love 'em. Yet there's a shit load of purists out there who moan, who get stuck in analytical stupor, can't get past the technicalities and into the fluid soul bubbling underneath.

But that is the fate of The Urges and all bands like them. And while The Urges are currently a long way from showing Tarantino's sheen, while at the moment they may borrow more than they give, if they perfect their own touch, put that vibe on wax, the narrow minded critics will be laughed out. Just like Tarantino's.

Of course that's not to say that the night was simply an energetic tribute to yesterday. Some tunes were brilliantly effervescent. The band managed to fuse their influences, to create something unique and fresh. The set opener was a perfect example, swirly, psychedelic, and - well - vibed. The band have chemistry, charisma, abundant primal energy, and are tight as shit. When they hit full swing, you groove. The sweaty crowd that left the music centre is testament to that.

I heard Hot Press have slated this band; I haven't read the article and so can't comment. They are worth a try though, go see them live. At worst you can have a few pints and cast some lofty aspersions, at best? who knows?

Whether The Urges get their stuff together, nail down the evident promise, (and I think they might) and whether they get that stroke of luck needed to land a deal, is irrelevant today. What matters is that they're a great live band, simple as that. The scene needs more bands like them, bands you can go out and have a good time to. Bands that are energetic, loud and just a little bit odd.