Kinross, the home of Scotland's equivalent of Witnness already has the T-party started when we arrive on Friday evening with bars, funfairs and DJs already in full swing. There's a great atmosphere here for the following 2 days and it certainly beats the organisational nightmare of last year's Witnness festival (i.e. no traffic tail backs, no human tail backs and no sound systems blowing up). Saturday starts with an unexpected hangover but that's soon replaced by heartbreak with the crushing news that the White Stripes will not be here after all, thanks to Jack White's car crash and a broken finger. Suddenly it feels like the sun has gone in. 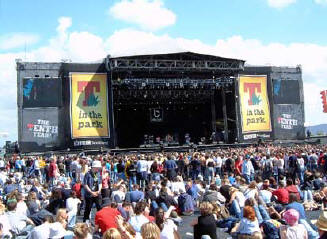 Anyway, off to the NME stage to start with, where the Warlocks don't help the hangover with their trashy punk style and aggressive vocals. It's obviously a big thing for them as they photograph the audience several times before leaving.

Next up are the comical Turbonegro from Norway, dressed up in true pantomime style as sailors and demons with the lead singer wearing a costume that would look well on a ringleader of a freak circus or something. It's another punkish gnashy set with hypnotic beer belly wobbles in true Homer Simpson style and songs about erections. Musically, these guys mean little or nothing but for festival spirit, they are sheer class.

They make way for Snow Patrol who play a vibrant set with infectious guitar tunes and true summery melody. Throughout all the bouncy pop-rock tunes, singer Gary Lightbody is animated and zesty on stage, quite befitting the sunshine atmosphere.

Off to the T-break stage which has been specially set up to expose up and coming Scottish talent. Unfortunately, Katy Bar The Door show little talent in their unimpressive clattering of overdriven guitar, so we make a sharp exit.

Back on the NME stage, the Saw Doctors are pleasing their Scottish cousins with their Irish charm with sing-alongs such as 'To Win Just Once' before finishing off with the silly old favourite 'I Used To Love Her'.

The Proclaimers are truly at home on the Main Stage, and the crowd singing 'Letter From America' and '500 miles' can be heard for miles. Quite literally. The Cardigans can't match that, try as they might with their new songs but 'My Favourite Game' sounds great on a summer afternoon.

Still on the Main Stage, Idlewild look thrilled to be playing in front of their home audience complete with a few lofted bare-chested women at the front. With new bassist Gavin Fox who joined them from Turn, they play a blistering set with wonderful renditions of 'You Held The World In Your Arms' and 'Scottish Friction' that truly captured the sounds achieved on 'The Remote Part' album. This is a band clearly on top of their game and are certain to get bigger and better. Whisper this, but this show completely outshone their gig in Dublin last February. Nice stage manners too.

Off to the X-Tent to catch the blissful tunes of Athlete still etched in memory from a sparsely populated Witnness Upstage last year. Alas - the tent is packed to capacity and closed well in advance of their arrival, so we miss out just like so many 2002 Witnness-goers. That's a very obvious warning sign to book your tickets fast for their upcoming Dublin gig folks.

Back to the Main Stage and the crowd bemoans the absence of the White Stripes. With so many people hanging for a live '7 Nation Army' to rock the festival, it's a devastating loss. But wait, what's this? The Flaming Lips take the stage dressed in red and white and are fully armed with fake blood, loudspeakers, bags of confetti, balloons and a host of furry friends, even a centipede. And to the crowd's delight they open with a fuzzy '7 Nation Army' themselves to save the day. Wayne Coyne sings his thanks to Jack White for a fibre optic Jesus and sings him a happy birthday. The Lips are truly modest and unassuming throughout the set and their tribute to the Stripes is truly heart-warming. Not that the Lips are outdone themselves, Coyne transcended his vocal limitations for the entire set, particularly on a gospel-like rendition of 'Yoshimi Battles The Pink Robots' inviting the crowd to join in celebration rather than sadness. A superb performance of 'The Gash' was also a pleasant and aggressive surprise in such a dreamy set. It's something of a cruel irony that the Lips end up on the Main Stage in such circumstances, but they're worth every second of it.

To finish off what has already been a great day, the masters REM take the stage. It's obvious that they're treating this as a Greatest Hits tour with a career spanning set of songs. Indeed all of the first 6 songs pre-date Out Of Time, with 'Finest Worksong' and 'Get Up' being notable highlights. It's pure gold for vintage REM fans. The crowd really got going with 'Imitation Of Life' and 'The One I Love'. They also played 2 new songs that will be featured on the upcoming Greatest Hits release, 'Animal' and 'Bad Day', hard hitting tunes reminiscent of the Document era. Stipe's usual banter included his distaste for Becks beer, much to Tennets-slurping crowd's disgust, while new drummer Bill Rieflin (who just so happens to be Scottish) got a chance to show off his kilt. Overall, the set didn't really differ much from anything on 1999's Up tour other than a surprisingly kicking 'So Fast So Numb', but you can't argue with the class of this band on stage. Predictably finishing up with 'It's The End Of The World', even if it were, the crowd couldn't have returned to more late night partying any happier. Roll on Day 2.