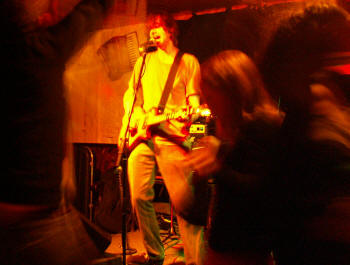 Review Snapshot:
A gig 18 years in the making. Cluas catches up with an old friend as it drops in to the Sugar Club which is playing host to the launch of Stoat's debut album "Future Come And Get Me". The oddball indie-poppers are in fine form playing a selection of songs from the album as well as rocked-up takes on some of your childhood favourites.

Full review:
The members of Stoat have been making music together for the best part of 2 decades but despite this I've managed to live my entire life thus far without hearing anything that they've produced. Part of it is probably down to my own laziness but it could also be due to the band's infrequent live schedule over the past couple of years and the fact that their recorded output has amounted to 5 singles and an unreleased E.P...

Nonetheless the band is not without their fans, Cluas founder and editor Eoghan O'Neill being amongst them. In fact, the early history of this site is closely tied to Stoat, they were one of the first bands reviewed hereway back in 1999 and they headlined thefirst gig Cluas ever organised in December of that year. Since then however mentions of Stoat in this little corner of the web have been non-existent so when the band announced that they were finally getting around to releasing their debut record, "Future Come And Get Me", our intrepid leader was adamant that we cover it and urged that someone go and review their album launch. Obviously that someone wound up being yours truly. Although I must admit feeling some anxiety about it as they had been described to me as "One of the more intriguing offerings on the local scene," such phrases instantly conjures up frightening images off weird, self-indulgent music that lends itself more to chin-stroking than toe-tapping.

Boy was I wrong, intriguing Stoat may be but their performance is a million miles away from being self-indulgent and difficult. Instead it is in fact possibly the most fun you can have in a Dublin venue this side ofa Neosupervital gig. Opening with a rocked-up version of "Que Sera Sera" and finishing with a version of "The Teddybears Picnic" which quickly segued into a cover of Cyndi Lauper's "Girls Just Wanna Have Fun" Stoat managed to infuse everything they played with a sense of fun and the sheer joy they got from just playing this gig (and it's taken them 18 years to get to this point, who can blame them?) was both obvious and infectious.

It's extremely hard to describe what Stoat's music is like because they're one of the most bizarrely diverse sounding bands I've ever come across. Ostensibly they're an indie-pop outfit (albeit one with a somewhat twisted view of the world) but that label is nowhere near far reaching enough to accurately describe them. "Oh Happy Day" and "Nobody In Heaven" fit most snugly into that particular pigeonhole and are fine examples of the style but beyond that things start to go awry.

"The Saltee Tango" is a sea shanty set to a military drum beat, "Acunamanacana" fuses ska vocals with various styles of indie guitar and a vaguely metalish bassline, and "59 Dame Street", with the machine gun like spoken-word delivery of its lyrics sees vocalist and guitarist John Hearne borrow a couple of ideas from Dave Couse to great effect. And then there's the 5-person male voice chorus that sounds more like a drunken sing-along then a group of backing vocalists. Yes it's quirky, in fact it occasionally even surpasses quirk and ventures into the realms of "strange" but when it works, and that's most of the time, it's wonderful.

Stoat are a good band but it's easy to see why their career has taken the path it has, in a world that demands groups that can be easily described and lumped in with a bunch of similar sounding acts they defy that convention. Their sound is too inconsistent for them to be classified in any of your standard indie sub-genres and, eccentric moments aside, they aren't out there enough to be classified as "weird". But they are a band that deserves to be heard and hopefully "Future Come And Get Me" (which in an admittedly weak year for Irish records is the best Irish album that I can recall being released in 2005) will bring them to a wider audience because, as great as the likes ofRadiohead,Interpol andThe Smiths are, you sometimes need to hear music that just makes you want to smile.

Check out a review of Stoat's EP 'Oh Happy Day'