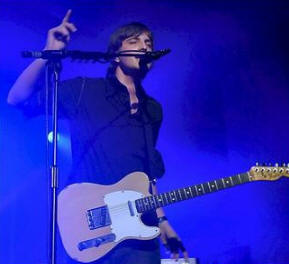 Review Snapshot:
A good gig with some energetic songs but not enough to convert this novice Starsailor fan.

Full review:
They're always the best, those last minute gigs, where you had no idea you would be going, no expectations, no excitement building up, no countdown (okay maybe that's just me). On the other hand it's generally a gig where you know little about the band, which is the category I fell into going to the recent Starsailor gig in the Ambassador. It was organised to celebrate the 50th birthday of the rock guitar, the Fender Stratocaster, in one of Dublin's best venues, the Ambassador, in aid of the Childline and TOFS children's charities.

Thanks to one generous cluas writer, I found myself heading along for an unexpected night of music. We unfortunately missed up-and-coming Dublin band Hal, who were first to perform but with pints in hand we were settled for the Glaswegian Cosmic Rough Riders. They were greeted with a mediocre crowd reaction but then it was pretty empty downstairs. When they started playing they certainly blew the cobwebs from the corners of the Ambassador and shook the cardboard cut-out Fender Stratocaster, which dominated the left side of the stage. They were deafening and I don't think it was how they meant to sound. We had to move back behind the sound engineers but were still blasted out of it, maybe I'm showing my age but having listened to their "Too far to see close" album at a lower decibel level I know that they didn't need to be this loud. When our ears got used to the increased reverberations, their harmonies, catchy songs and tight musical style were revealed, emphasising their years playing together. It could have been much better though, if only they had turned down the volume.

Following their set, the mostly male audience moved en masse towards the stage, clearly excited by the prospect of seeing their heroes. Starsailor appeared and got a great response. They played various songs from their two albums, 2001's 'Love is Here' and their 2003 release 'Silence is Easy'.

These included 'Lullaby' which I knew from a CD I had when I was travelling, so for a few moments I was transported back to a journey through Western Australia, many months ago. It's a catchy song, allowing James to show off his ability to hit the high notes. 'Silence is Easy' with its rousing chorus, had the crowd joining in, and triggered the strangest, jerking dancing I have ever seen from 2 girls to our right. A change of pace with 'Alcoholic', a plaintive, pretty depressing song, initiated on the piano and then ramped up to include the whole band.

The pounding, funked up 'Four to the Floor', sounded great even without the strings section. Lead singer James, encouraged everyone to dance and the fairly simple lyrics were more than adequately carried along by the crowd. Stripped down to drums and piano section before building back up, the crowd really got into it before it's climactic finale, it was Starsailor at their best.

Without doubt James has an impressive voice and they're slick, can rock and do ballads but just as there were highs, there were lows too. Some of the songs between the rocked out numbers began to grate and just like I would on a CD I wished I could skip them. James' voice, though sweet, sometimes veers towards a whine and a couple of their songs have a sameness about them that I just couldn't get around.

It's always a nice surprise to go to a gig at the last minute and occasionally you're blown away but I'm afraid in this instance I wasn't. It was a good night with a solid performance from the two bands we saw, but I won't be first in the queue the next time they come to town.