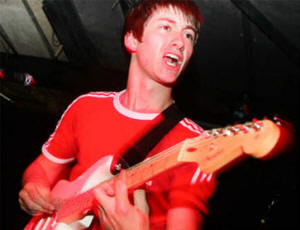 Review Snapshot:
The second sold out night of the NME tour. Even asArtic Monkeys look set to blow up, Maximo Park claw on to the headlining slot. A splash of New York gunk (grunge/punk - new genre name invented right here right now) from We Are Scientists and prog from the Mystery Jets. Parental participation necessary.

Full review:
Apologies to the Mystery Jets. This reviewer missed their slot, and understandably so, given the early time of 7.30pm. Most mightn't have been as unfortunate as I, given that they all appeared to have had sufficient time after school to whack on the Fred Perry polo shirts for the boys and Top Shop stripes from the girls. The atmosphere was young and on heat. The girls ripped down promotional NME posters advertising the mag's upcoming award ceremony (ones featuring Green Day and Ian Brown were conspicuously left hanging). Girls piled into toilet cublicles "practising their lines" as the Artic Monkeys would put it, and geed and gelled up boys clammered for the bar with watered-down beer in malleable plastic cups dripping on to their Reebok Classics.

There was no doubt who most of the gang were here to see. But first up, (after Dad/Son/N Mates prog combo Mystery Jets) were New Yorkers We Are Scientists, a blistering bunch of carefully ruffled skinny thinking punks. They slammed through their major label debut album, 'With Love and Squalor' with guts and glee, and the crowd loved it. They were new to most, and as the set progressed, it became clear that they might end up new favourites to most.

Keith Murray, lead singer and guitarist in the three piece smiled at the cheers and brushed his hair across his forehead behind his right ear throughout, revelling in the atmosphere his band were so easily building, especially when they banged out "It's A Hit" and "Inaction".

Following their set, the crowd surged forward, palpitations from waiting girls and sweat from boys readying themselves with tapping feet, shaking shoulders and chants of "MONKEYS, MONKEYS". And they came, Alex Turner all Corona-sipping, head-scratchingly stunning. They owned the stage, they owned the venue, hell, they owned everyone for those 13 or so songs. Starting, inexplicably with their two number ones, 'When The Sun Goes Down' and 'I Bet That You Look Good On The Dancefloor', which created what can only be described as a frenzy all around the Ambassador.

It's hard to gauge whether Turner is under or overwhelmed on stage. The entire band carry the appearance of one still belting them out in their garage, possibly because their transition from that setting to this has been so incredibly swift. 'Perhaps Vampires Is A Bit Strong But...' added some artful sloppiness to proceedings, but as 'Fake Tales Of San Francisco' rang out along with the chantable line of 'KICK ME OUT, KICK ME OUT', it was clear that the crowd wanted anything but.

Maximo Park had a lot to live up to, especially as around 50 or so suitably invigorated Artic Monkeys fans scarpered, but they showed their (relative) experience and continued to pump the crowd up thanks to singer Paul Smith's inexhaustible energy. They made a bit of a ruckus too, occasionally gathering to bump into each other - perhaps a stab at emulating Artic Monkeys punk stature that preceded them. 'Graffitti' was up first, signalling that they were ready to take on any doubters of their position as headliners, and all the hits followed - 'Apply Some Pressure', 'Post Cards Of A Painting' and a darker new one 'In A Fortnight's Time'. Endearing and utterly engrossed, Smith handed himself over to the crowd, gesturing wildly and appreciatively, before they finished with 'Going Missing'.

A fantastic and fun showcase of all that you'll want to hear for the next few months.