This article was first published on CLUAS in Nov 2005

Jaws dropped when the bill was announced mid-August. How did the organisers of the suddenly-sprung Beijing Pop Festival land one of Britain's biggest rock names for a festival in its first edition? Even more surprising, Brown would be coming to China barely a week after he'd released his latest album, Greatest, a time usually taken with press interviews. 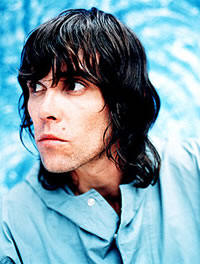 In the end Brown chose Beijing over the promotional rounds of European radio and television stations. The day-long event he headlined at Chaoyang Park on September 17 drew several thousand fans, though not the 12,000 that organizers afterwards announced. Last year's Chaoyang Pop Festival in the same venue drew a lucky bag line up of pop stars and rockers from mainland China and Taiwan, with some an eclectic smattering of nobody country singers, folkies and world music groups invited by the embassies of several foreign lands in the capital.

This year rockers and rappers from China, UK and the US gave a sense of purpose and a harder edge to the line up. Also appearing were American rapper Common, still getting mileage out of a music journalist suggesting him as the "Bob Dylan of Hip-hop." The biggest draw though was Brown, idolized as the singer of disbanded British rave-rock group the Stone Roses. Brown has followed a solo career since the group, one of the most hagiographed and hyped to come out of the UK in the 1990s, fell apart in 1996. Brown, who founded the group with schoolmate and guitarist John Squires in mid 1980s Manchester, has pursued a patchy solo career since.

As promised by organizers, Brown played a slab of Stone Roses songs as well as songs from his own solo albums. The loudest cheers of the night though went up for I Wanna Be Adored the anthemic Stone Roses hit which guaranteed the group a lifetime of royalties. Brown was a 'natural choice' to headline the festival's debut edition, said organiser Jason Magnus, whose Rock for China Entertainment Ltd staged the one-day event under authorization from the well established Beijing Music Festival, Beijing's annual season of classical and folk music. "Ian Brown is a musician who blended some of the defining styles of early rock into a sound that's new and which flirts with dance music and he's still experimenting today", explained Magnus.

A legend perhaps, but most of the fans who hoofed into the centre of the expansive park to see the festival seemed to be there for the Chinese groups on the bill below Brown. They had to arrive very early: the first bands were on stage at 11a.m, a sleeping hour for musicians used to playing the city's all-night rock clubs. Among the first up were Overload and Muma, two of the most promising groups on Beijing's club scene.

Afternoon act Chang Chenyueh served up a blend of Taiwanese soft rock and indie pop on the singer's first live foray into the mainland. No strangers to the scene, Tang Dynasty played a one-hour set of speed metal spliced with the folk-induced older numbers that made the band a huge name across China in the 1990s. Older and wiser, the band's on-off formation looks and sounded like the Chinese version of Iron Maiden they've often been described as. Their reception was loud and full-hearted, but fans bitched too about how the festival billing had been organized. "It doesn't make a lot of sense to have the Chinese on first," said Tang Dynasty fan Da Li. "A huge crowd would come out for Tang Dynasty if they were playing at night. There's not enough foreigners here to fill the place for the headline acts and not enough local fans who know enough about them."

Organisers may take note for 2006. The Bejjing Pop Festival was billed by organizers as the first in an annual "series of events." An arts graduate from Harvard university, organiser Jason Magnus said the "gulf in cultural awareness and appreciation for this most vital of art forms" in Beijing and Hong Kong was the 'fundamental catalyst' driving him to organize the festival. Magnus ran the festival along with Long Yu, conductor of the Chinese Philharmonic Orchestra and one of the directors of the Beijing Music Festival, one the biggest of its kind in Asia and into its eight edition.

The flyers were another reason the festival still looks like a work in progress. Gaudy and childish-looking, they were anything but rock-hip. Though backed by the Ministry of Culture and the Beijing government, the festival managed to pick up some corporate sponsorship, mostly from Chinese companies: Mastercard was the only significant western corporation to have its logo plastered on event flyers and billboards.

Despite corporate sponsorship, entry to the festival wasn't cheap by local standards. The better tickets were outrageously priced. Who pays RMB800 - 80 euros - to go VIP to a rock concert after all? Answer: nobody, most of the tickets were handed out to dignitaries whose stamp of support allowed the event go ahead. Yet most of the VIP tickets had landed to scalpers who flogged them outside for a fraction of the face value.

Inside, Ian Brown could be the spent musical force of The Stone Roses - none of his solo albums have matched the mercurial genius of the Stone Roses eponymous debut album - but he was a big enough name to launch the first Beijing Pop Festival. Attracting more contemporary talent was vital for the next edition of the show, suggested seasoned concertgoers at the festival. "It could be a success if they have the courage to expand," said Philippa Wu, a Beijing-based music fan who grew up in Ian Brown's hometown, Manchester. "You need more than one stage. You need more bands and you need more than one day. It's not really a festival till there's people getting wasted and sleeping in tents right around the site."

Back out on the street meanwhile, Ian Brown seemed to find it easy to get around the Chinese capital unnoticed. The afternoon after the concert he was spotted shopping in the pearl section of the Yashow market in Beijing. Playing Beijing had obviously been worth his while.