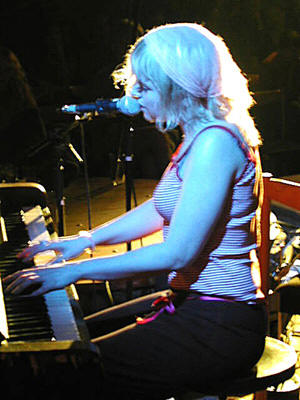 Review Snapshot:
Overcoming severe sound problems on the night, Nina Hynes puts on an impressive show of ambitious and enjoyable astral-pop from her forthcoming album.

Full review:
Monday nights really aren't the best for filling any venue - especially in Paris, where the lifestyle of 'metro-boulot-dodo' ('train-work-sleep') keeps everyone at home on weeknights. Just as unnerving for acts are persistent technical problems, killing any hard-won vibe you've created.

However, neither of these setbacks could spoil an enjoyable show at the Fl?he d'Or in Paris by Nina Hynes, now based in Berlin.

While Hynes' new album 'Really Really Do' features her backing band The Husbands, tonight she settled on monogamy, being accompanied by just one of her harem, Fabien Leseure on keyboards.

Unfortunately for them, their set was bedevilled by sound problems which on two occasions forced them to start again. Nevertheless, we heard enough to leave us greatly impressed by some ambitious and imaginative material.

Ever since the lovely 'This Magic Stuff' in 1999 brought her to our attention, 'dreamy' has always been the best adjective to describe Hynes' music, and both 'Flutter And Wow' (where Hynes uses a spoon on her guitar, rock/cutlery fans!) and the album's title track continue her trademark of lush, catchy pop built on solid songwriting. Layers of intergalactic swirls and astral swooshes from Leseure hung like tinsel from the tight punk riffing of Hynes on guitar. Dreamy, yes - but never drippy.

Other songs showed a more muscular side to Hynes' repertoire. 'Fitness' fizzed with energetic indie-pop and 'Somewhere Out There' is a slinky bit ofGoldfrapp-esque electro-glam. And the darker, rockier tones of 'Universal' (fromher previous album 'Staros'), 'There You Go' and 'If Only Suicide Was A Way Out' gave some contrast to the pop thrills of the rest of the setlist.

On this showing, Hynes' new album promises to be that rare thing: a great Irish pop record. May she get the full house and perfect sound desk her songs deserve.

Check out CLUAS.com's feature on Nina Hynes from 2002.