The Magic Numbers (support from The Immediate) 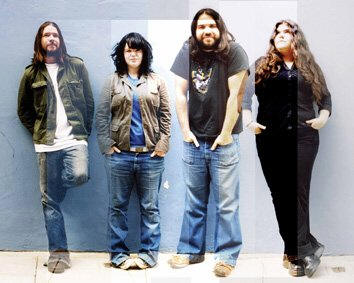 Review Snapshot:
Good times are hard to come by, and Monday night isn't usually the place to find them, but tonight, inshallah, I struck gold. The gig was energetic, the band beautiful, and the crowd as eager to be pleased as to join in. Harmonies were nailed, smiles were flashed, sweat dripped from the ceiling. Good times. Good times indeed.

Full review:
I arrived in the Ambassador just after eight to find a steadily filling venue, and support band The Immediate looking a little lost, but sounding great, on stage. The band have some good tunes, (I hadn't heard them before tonight) and are undoubtedly talented musicians. Throughout their gig they switched instruments and traded vocal duties like partners at a twisted Moonie reunion. Now this is well and good, if you can pull it off, and to do so each person should bring something to each new instrument beyond (sometimes basic) competency. Unfortunately, that didn't happen. The original drummer was brilliant, the singer would be better off on bass, and the bassist was in possession of the best voice. Showing off is well and good, but a band should play to their strengths; I don't think The Immediate did, and the songs suffered. That said, they had some good tunes, set closer "Can't stop moving" provided a jagged finale, driven by a pounding bass line, and offset by some squalling, delayed guitar. Good, but?

As the house lights went down just prior to The Magic Numbers taking the stage, the crowd seemed to surge and swell with an anticipative energy rarely felt at gigs. I gotta admit I felt a little shiver, and that lovely warm feeling that this could well be a very good night. I wasn't to be disappointed. Some parts dragged a little, the band do have a very simple setup, but anytime I got a little worried, they put the foot down and kicked it out again.

The Magic Numbers come across as very humble and appreciative, a trait that is inexplicably absent from so, so many bands. The gig was filled with big smiles, long hair, beards and warmth. All combined to kick off a nostalgic west coast sixties vibe, that was more about enthusiasm and unfiltered love of the material, than any aural throw back. The crowd were a mixed bunch, with more couples than I have seen at any gig, but they knew what they liked and, where I was at least, definitely knew how to boogie.

The album is quite a laid back affair, but live the tunes get infused with a new life; meaning that now, listening back to the album, it has changed, imperceptibly perhaps, but infinitely better. These are some fine tunes, and they were played with passion.

The outstanding aspect of the gig, for me, were the harmonies. I love all harmonies; I came very close to an unplanned orgasm during Crosby & Nash, and tonight The Magic Numbers created something beautiful, full and spell binding. Some parts evoked the intricate playfulness perfected on Leonard Cohen's "Hey, That's No Way To Say Goodbye" and were every bit as beautiful. "Wheels On Fire" was unbelievable, harmonies dropped in and fluttered out, vocals soloed, duoed, and danced. Fantastic.

As I mentioned above some parts of the gig dragged a little, and you get the feeling that another instrument wouldn't go astray, maybe some keys, maybe some sax who knows. Actually, "I See You, You See Me" seemed to enforce this feeling, a tune that is augmented by a plinking xylophone and a deep rumbling bass, down beat perhaps, but soon kicked stridently back into the band's trade mark bliss, all the better for its diversions.

Any worries which may have snuck into the back of my head about a lack of diversity and second album shame were thankfully and gloriously kicked aside with the bands final song. It's a new tune, I'm not sure of the name, could be something like "Bard In Every Hallway", and it is good, very good. A bit of a departure in sound, a weird-joyous-hillbilly-rockabilly-loved-up-pumped-up-singalong-hootenanny-barnstormer of deviancy. The only thing to do is smile, dance and appreciate. And there were a lot doing just that.

The gig was a lot better than I thought it would be, and has opened the album right up for me. Some dude I met later on had spent twice the face value for a ticket and he too come out with a smile on his face? You could do worse it would seem.