God is an Astronaut

A review of their gig in the Temple Bar Music Centre, Dublin, 10 November 2006 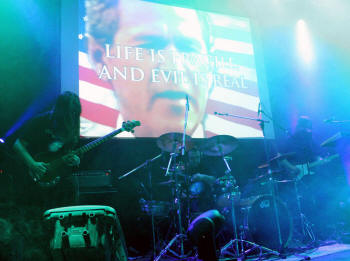 Review Snapshot:
I went to this gig as a newly converted fan and this live performance did not disappoint despite my high expectations. God Is An Astronaut played an electrifying set accompanied by visuals that added greatly to their instrumental songs.

Full review: God Is An Astronaut is a 3-piece outfit hailing from the Glen Of The Downs, Co. Wicklow. Over the last four years they have gained a reputation as purveyors of fine post-rock music. They have been steadily gaining recognition for this in international circles, and their last album and EP both received critical acclaim. This was my first live experience of God Is An Astronaut and I was excited having heard so much about their live shows (although this gig was listed on their official website not as a gig, but as an 'audio/visual show').

Support on the night came from Dry County and Tracer AMC. I had never heard either bands' music before the night and was pleasantly surprised by both. Of the two Tracer AMC impressed me the most, enough that I ended up purchasing their back-catalogue from the merchandise stand. Despite the limited stage space they produced such an intense sound, their drummer giving his kit one hell of a vicious beating.

Then God Is An Astronaut took to the stage, and were note perfect from the off. They dove straight into 'Twilight' without saying a word. We would not hear them speak until two tracks from the end when they would stop to thank the audience. The God Is An Astronaut sound, especially the tracks from their sophomore record 'All Is Violent, All Is Bright', translated brilliantly to a live setting. Tracks such as 'Suicide By Star' and 'Fireflies And Empty Skies' were electrifying and were received well by the crowd.

Each song was accompanied by a purpose made video. The most potent video, the one that I'm sure has stuck in the minds of everyone who was in attendance, was that of the title track from 'All Is Violent, All Is Bright'. It was a close-up shot of George Dubya Bush giving a speech regarding the USA's presence in Iraq, declaring that it represented a "shining age of human liberty? the rise of a free society", juxtaposed with shots of the bombings of Baghdad, the beating of prisoners and the violence on Iraqis on the street.

The visuals, while providing meaning and context to each song, drew attention away from the band themselves. God Is An Astronaut lacked any sort of animation or showmanship, something they could learn something from the likes of Tracer AMC. Nonetheless, a night to remember.