Gang of Four live in Dublin 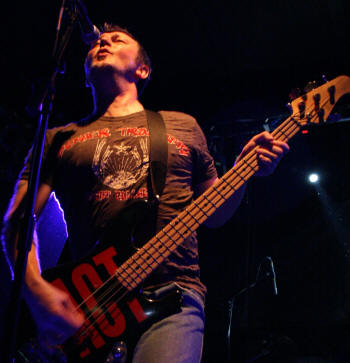 Review Snapshot:
Good crowd, great venue and a worthy performance, but did it have any real relevancy or power? Probably not. Decent Sunday night entertainment but unfortunately, not too much more.

Full review: This was to be my first time seeing Gang of Four, and effectively my first introduction to the band proper, knowing as I do very little of their recorded material. But by all accounts they had powered out a riotous performance at the Electric Picnic a few short months ago, the name packs a lot of punch, and it was a wet, miserable night in Dublin, what else would you do?

It was also my first time in the new Tripod venue, and I was impressed; lots of room without being cavernous, nice vibe (if a little trendy) and quality sound. It could well prove to be one of Dublin's better venues and, so far at least, the listings have been impressive.

Delorentos played a solid support slot; it's been a year since I saw them last and time has stood them well, helping perfect what was already a polished sound. They are currently recording a debut alum, and all the hard work may well be about to pay off with a trip to the limelight.

But this night was about Gang of Four, a punk band forged in the battle ground of the late 70's, inspired by Mao's widow and "anti-communist" revolution, who were playing their first gig proper on Irish soil. The dance floor was near packed and expectations were high when the band took to the stage, and the songs came fast, furious, and energetic. This was clearly a hajj like pilgrimage for some, with all those years of waiting released exuberantly to an explosive wall of sound.

Tight, and in control as they were, one thing grated. At the end of the day, regardless of past glories or vinyl perfection, Gang of Four are now old men playing punk. No matter how well they play, how good they look, or how much they really believe, they are from another time and just don't seem relevant. They lacked the primal power and life force of their youth, connecting like still cool uncles at a drunken Christmas party. "We only want to get wasted," and "We party 'till six." Hmmmm.

A cool segment, and a glimpse through the looking glass to a time of former glory was the destruction of a mic'd up microwave; percussive, bizarre and spectacle. It hinted at a previous passionate conviction but came shudderingly into focus as a stage hand quickly swept up any fallen debris.

Straight out and simple, I just wasn't convinced. If you were a fan, you may well have loved it, though what it could have delivered other than phelgm-flecked nostalgia is another question. This type of music demands something firmer, more real and grounded in the now, no matter how relevant the message is. The performance was tight and enthusiastic, it just wasn't convincing.

I'm sure Gang of Four probably won't appreciate any comparisons to an ageing Paul McCartney and a certain "Back in the World" tour, but there you go.

Photo above taken by Elva Bannon at the gig.