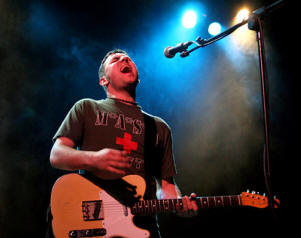 Review Snapshot:
This gig, purely in scientific terms, was amazing. Something to be studied, analysed, pondered over (if you really could be arsed) but ultimately something to be hugely grateful for. Never before have I seen such a crowd, such a vibe, such an atmosphere at an unsigned gig. This is what we need. Things seem to be starting to happen in Dublin at the moment, so throw open your arms and let the good times roll!

Full review:
Tonight marked the launch of the Delorentos debut and self-financed EP, "Leave It On." The band have been working hard for the last while, gigging throughout the country and recording whenever time and funds allowed. Tonight at least, it most definitely looks as if the effort is paying off. To say Whelan's was full would be an understatement, it was packed. 506 people, with more turned away at the door.

The stage itself was quite impressive. A very simple but groovy light show worked really well, syncing in with the music, pulsing with the crowd, helping to set the scene. You can preach about how "it's" all about the purity of music, but a gig is more than that; it's a happening, a fusion of many different strands, with the music at its core. Tonight the effort was made and it all seemed to fall into place.

Support came from The Chapters and Dry County. Unfortunately I missed most of The Chapters, but Dry County were very interesting. They're electronica with guitars, drum loops, and bizarre stage props. Definitely a prospect, but not quite there yet live. Actually while the drum samples are good and different, I think a funky drummer would really set this band on fire. That organic-electro groove that The Propellerheads inhabited could be theirs, and goddam that would be a gig.

Delorentos themselves have a peculiar presence on stage. They may not look like your typical dirty rock and roll band, but they have something, the elusive "it", that easy-going kind of magnetism which allows them to fully inhabit a stage and make it their own. Actually for some reason I just thought of The Band; they may be nice blokes, but they can kick it. To describe their brand of rock is quite difficult. That's not to fawn over it and say it's amazingly revolutionary, because it's not. The Delorentos sound is no new art form, but rather a fresh, fluid burst of life, and to be honest, I think it has to be experienced live. Since the gig I've heard the EP and while it is quite good, its songs are the same in name only as those which burst out of the stage, and that sound is more than a little special. A tight rhythm section provides the back beat and groove for some jaggedly upbeat guitars and shimmeringly-effervescent vocals.

I've said it before but the vocals really do set Delorentos music apart. Not that the underlying score is somewhat lacking, just that the singing adds that extra dimension; from acapella openings, to harmonies, to double and even triple tracked vocals, or even just the sharp lyrical trade offs? it all works.

The band finished, as can be expected, with their new single, "Leave It On". It was fast, loud, expressive, just plain right. Ronan seems to have found his voice on this tune, sitting back and inhabiting the groove. As the dying chords rang out and Delorentos left the stage a cheering crowd stomped and called out for more. This isn't supposed to happen at an unsigned gig? thank God it did. Experience it.

I gave this gig 9 out of 10. That might seem a little strange, and if you were expecting to see Dylan at the Manchester Free Trade Centre or Zeppelin shaking the stage at Madison Square Gardens you might have left a little disappointed. But the quality of this gig, every aspect of it, was amazing. And all from an unsigned Dublin band.

Check out another review of Delorentos live in Crawdaddy in June 2005.

Check out an interview with Delerontos that took place on the day of this gig.