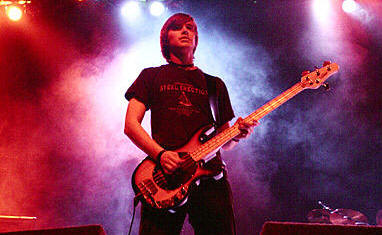 Review Snapshot:
Different, fluid and refreshing, leaving the Olympia I was impressed. Tonight's show was a good performance, by a band that seems to scream potential. Unfortunately, as a live event, it was no hootenanny, but the Olympia is huge, the show was early, and people were only arriving.

Full review:
I heard an old Delorentos demo about a week before this gig and, lying knackered on my couch in no mood for anything but self pity, I have to say I liked it. It was a little different, some parts were a bit formulaic, but there was that undercurrent of potential, the kind of exciting sound you sometimes hear in a new band where you go "ahhh, this could be going somewhere." Over the course of the gig, that feeling was strengthened to the point of conviction. The night opened bravely not with a rabble rousing cacophony of noise but quiet guitars and near perfect singing. The vocals are definitely one of the great things about this band, and on the night both guitarists sang, sometimes interchanging words, sometimes in harmony, (sometimes finishing each others sentences, but we won't go there?). The most perfect moments came when both singers sang as one, not strictly harmony, but double tracked aural bliss, a good thing indeed. Actually when they traded vocals I was reminded of that spark which set The Libertines apart, and they definitely show traces of the same innocent energy and enthusiasm, 'though hopefully their fates won't be shared.

Live, the show was energetic. There were elements of The Mars Volta's on stage aura: that jagged-jittery-frenetic-tightness, although a lot of that could have been down to guitarist/vocalist Ronan, who is about as close as they come to a breathing rock'n'roll photograph. The tunes played tonight were no musical revolution, but were definitely a groovy take, and a love of the music comes across in waves. Unfortunately, as I mentioned above, there was a touch of the elements conspiring against Delorentos tonight. The Olympia is a big venue, the gig was early, and though it filled steadily throughout the show, there just weren't enough people there to really make it heave. Well, that is apart from one (sexy) redheaded deviant who looked as if she had come straight from a hillbilly hoedown in roaring mood for some primeval pirate polka!

I don't know enough about this band to say any more, this was my first time seeing them. I will however, make a point of checking them out in the future. In a venue that suited, with a crowd of their own, the show could really be quite something. A pending release was mentioned, and their website says that they are currently recording, so hopefully that will work out. With the guidance of a good, innovative producer this band feel like they could do something worthwhile in the studio. Hopefully they won't get saddled with some twit who just wants to record them live, the freedom and experimentation of the studio can only suit Delorentos. They seem to have the talent to pull it off, so we'll just have to wait and see if they get their break and find the muse.

A good start to the weekend.

Check out another review of the Delorentos live in Crawdaddy.