Review of their gig in Vicar Street, Dublin, 1 March 2005 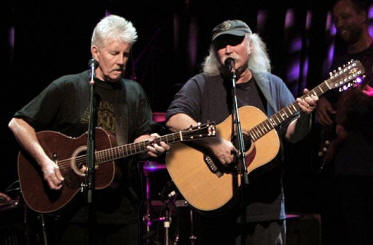 Review Snapshot:
I've never been this impressed at a gig before. I spent the first hour or so in complete shock, beatific amazement, and child like wonder. Their enthusiasm and love of the material comes across like no one else I've ever seen. They hug each other at the end of a great song, knowing what they've done and all I can do is gaze, stunned. I've heard the Harlem Gospel and loved every minute of it, but if there is a God, this is how he intended man to sound. As the old saying goes, "if there's anything better He kept it for himself."

Full review: I didn't quite know what to expect coming into this gig. I first got turned onto Crosby, Stills and Nash a few years ago when my Dad gave me a present of the Jefferson Airplane's "Surrealistic Pillow" and 3 Doors albums, and I started to get turned on to the "San Francisco Sound." My first listen to CSN's debut album was mind blowing. Suite: Judy Blue Eyes, Helplessly Hoping, Long Time Gone, all amazing tunes, and those harmonies. Beautiful.

But what effect had time, drug addiction (and the accompanying redemption) done to the musicians. The only solo album I have is "If I could only remember my name" a 1970 album by Crosby, and it is patchy at best.

Any fears I had were quashed as soon as the band walked on stage, relaxed, friendly and most definitely in control. They kicked the show off with a rousing version of "Military Madness" the song with which they open all their European shows, to let us know that they are from the "other half of America... hey it's embarrassing!" The musicianship was outstanding, with lead guitar supplied by Steely Dan's Rick Derringer, but I had come to hear the harmonies, and wow. I was in awe. I don't think I have ever heard anything sound so perfect. It could almost be described as angelic, but that's a bit of a misnomer when you're singing about the killings at Ohio State (Military Madness), the joys of a good joint (Marrakesh Express), or just with almost 20 years of crack cocaine addiction behind you (Crosby).

I spent the first half of the show in stunned admiration, absolutely astounded. That's not to say it was perfect however, some of their new songs weren't quite up to scratch. I'm not saying they were bad, not by any means, but while they were expertly written and lovingly performed they quite often lacked that certain "edge." For this reason I think that the show good as it was, would be incomparable to a CSN or CSNY show. The virtuosity and grit added by Stills and Young would have gone a long way tonight, not to mention that I would have heard "Suite: Judy Blue Eyes."

Highlights of the night were "Long Time Gone" "Almost Cut My Hair" and the excruciatingly beautiful "Guinnevere." I've always loved Long Time Gone, but Guinnevere never really did it for me on record, it was just another "nice" song, never really transcending the medium. But holy shit, this was amazing. The entire venue fell silent, legitimate "shock and awe", and even at the end of the song there was a deadly quite, an intake of breath, before reality hit home and the applause broke out.

All in all, it was an exceptional gig. The harmonies were out of sight, the crowd interaction and the musicians' love of the material was uplifting, indeed my only regret was that I couldn't fire up a joint during the intermission (see note below). Well worth the 50 euro, even if it has killed my social life for the next month. If you get a chance to see them, do.

Note: Excuse us as we state the obvious but Mr. Murray's reference in the final paragraph above to 'firing up a joint' was tongue in cheek, an ironic reference to the new smoking legislation introduced in Ireland in 2004. A website that advocates good family-values, we wish to take the opportunity to remind y'all that CLUAS does not condone nor encourage the use of soft drugs. Or hard ones for that matter.