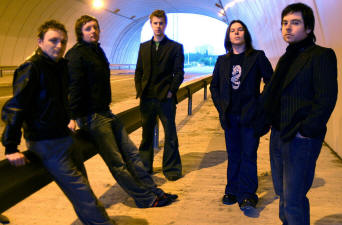 Review Snapshot:
A great concept, a good night, and a hell of a lot of promise. This was a very different type of gig, my first real exposure to the unfiltered 'show case' concept, and as beginnings go it was a success, hopefully laying down the foundation for a very successful series of nights. The only disappointing aspect was the gallery aspect of the show, perhaps due to fact that most of the audience seemed to be friends and girlfriends.

Full review: Thursday the 9th of June marked the first CPU-Records chart gig. These gigs will be held monthly and feature the top 3 artists in CPU's new, and innovative download chart. It's a great opportunity to showcase unsigned Irish talent, give young bands a foothold, and show the people a good time.

The Eclectic were the first band to take to the stage, and played to a steadily filling venue. They kicked proceedings off in admirable fashion sounding not wholly unlike a fuller Nirvana for the first few chords. The Eclectic seem to be a band relatively new on the scene, and inexperience showed in their stage presence. Things were held up between songs as guitars were tuned, and even the singers' obvious energy couldn't overcome the rawness. Some of the songs also suffered from this inexperience, with almost token 'quite bits then loud bits' and a predictable song structure. The band have a very big, almost Muse-like sound, and in places it works really well, with all 5 members gelling beautifully. The song 'Potholes' towards the end of the set was a perfect example of this, full of great almost ambient moments and wonderfully complementing dual lead guitars. Simply put The Eclectic only really seem to start grooving towards the end of each song, when things finally ramp up and really start to cut loose.. As it is I get the impression that they are too stuck in the idea of what a 'good song' should sound like, and haven't really found their own voice. Unfortunately for them they aren't necessarily a pop band, and would definitely require more than one listen to suck the listener in. Hopefully this will be overcome in time, as the main stand out factor was an all too tangible uneasiness on stage.

Next up were 'Vesta Varro' who for me were the stand out band of the night. Immediately on stage and their confidence came across in a compelling wave, the lead singer quickly taking control, throwing heart and soul into what was a great performance. The band hail from Limerick, and definitely hold a few years over tonight's other bands, but as they started playing, and the manic, Ian Curtis-like, front man did his thing, the age factor became irrelevant, leaving behind only infectious and very danceable tunes. Standout tracks for me were 'Yellow Rose' and 'Sleeping Song' which was mysteriously dedicated to 'all the people in black.' 'Sleeping Song' saw the introduction of a piano and a definite mellowing in attitude which, while different, didn't really play to the band's energetic live strengths. While the band were spot on, and the tunes great, the front man, as is usually the case, stole the show. There might be no musical similarities but, as I said, Ian Curtis springs to mind immediately? upfront, passionate, jagged, clapping? and that can only be good. Tellingly, they were the only band that really had the crowd tapping along.

Identity Parade topped the CPU online charts with 1977 votes, and quickly came across as the most well established act. They had that professional, showmanship edge with no dragged out, inter-song tuning and time wasting. They were also probably the most accessible of all tonight's bands, and proved worthy of the headline slot. Musically they reminded me a little of the Undertones, having that same laid back energy, and effortless cool. They put out a solid set, but for me, Vesta Varro definitely stole the show.

All in all, the gig was a success, I would have liked to have seen more hip-shaking and less foot-tapping, but from the crowd present that's all that could have been expected. This is billed as a showcase gig, and unfortunately at times it almost felt like a gallery, with the audience keeping a healthy, observant distance. Hopefully as CPU-Records continues to grow in stature, the potential will be fulfilled, and these monthly gigs will become an established night out. And that, would most definitely be a good thing.