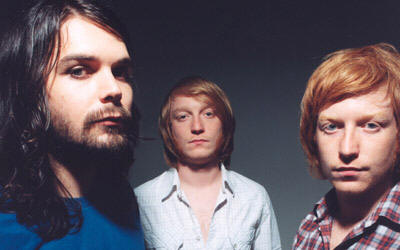 Review Snapshot:
Despite it being an all ages gig, in one of my least favourite venues, Biffy Clyro managed to turn in what was possibly their best performance on these shores, and all while wearing very tight red trousers.

Full review: When I heard over Christmas that Ayrshire trio Biffy Clyro were to play Ireland early in the New Year I thought to myself 'What a way to start 2007!' However, my initial enthusiasm was tempered somewhat by the fact that it was to be part of the Kerrang! Tour (meaning dreadful support), that it would be an all ages' show (meaning lots of My Chemical Romance t-shirts), and that it would take place in my least favourite venue, the Ambassador Theatre (meaning I couldn't bring my camera/over zealous bouncers).

As luck, and a disorientated taxi driver, would have it I only managed to see one of the support acts, The Bronx. This Californian four piece were without a doubt the worst band I've ever seen or heard. Forgoing such trivialities as melody and rhythm, the Bronx have opted for the 'play our instruments as loudly (not to mention badly) as we can while shouting incoherent rubbish into a microphone' method of music making. It's not big, it's not clever, and I'm afraid to say the Bronx had no redeeming features whatsoever.

Thankfully, Biffy Clyro swooped in, Superman trousers et al, to save the day. Intertwining old and new material seamlessly, 'the Biffy' produce music that takes on a life of it's own when performed live. On pervious Biffy outings I've heard them described by fellow gig goers as 'melody driven rock' and on tonight's showing it would be hard to disagree with that assessment.

It came through especially in their new songs such as 'Semi-Mental' and 'Get F*cked Stud', which were played with as much gusto, and indeed, were as well received as crowd pleasers '57' and 'Joy. Discovery. Invention.'

It seems as if Biffy songs, especially live, have a - and forgive me for reinventing the English language - singalongability to them, but without ever being cheesy or naff. It probably helps that the band genuinely seem to enjoy the accompaniment of hundreds of rabid fans.

Having earlier been likened by my better prettier half toFranz Ferdinand's older slightly more unstable brothers, Simon, James and Ben went on to play a superb version of their fellow Scot's hit 'Take me Out'. Following the briefest of interludes a roof-raising version of 'Glitter & Trauma' ended what was, by Biffy standards at least, a shortened set.

There were so many reasons why I should have hated this gig, the support and the venue to name but two. However, I discovered once again that it's great music and great performances, rather than great expectations that can make a gig enjoyable. Biffy Clyro have set a high benchmark for my gig-going year.