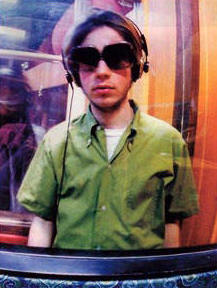 Review Snapshot:
Beck and his band perform an inspiring eclectic mix of old and new , with a bit of performance art thrown in.

Full review: Please forgive the sacrilege, but seeing Beck perform songs from his amazing repertory made me ponder what it might have been like to experience the Beatles perform their songs from Revolver. In the summer of 1966, just two days after completing recording of their masterpiece, the Beatles began their final tour, unable to recreate on stage any of their new songs, due to the complex and revolutionary creativity of their work.

Not so with Beck. Like the Beatles in '66, he's an artist at the height of his creativity, skill and massive imagination. He's got a few masterpieces behind him but, unlike the Beatles, he is able to present them on stage, in all their complexity.

Beck is in a small group of artists, including Peter Gabriel and David Byrne, who can successfully combine primal organic sounds with very modern technology and attitude into something altogether new. Think of his song Loser: an R&B drum beat, a raunchy delta slide guitar, an urban hip-hop vocal and a sitar! And it works!

Beck and band roared into this show with Loser / Black Tambourine / Girl and just kept comin' with great eclectic songs.

He shows a wonderful balance of performance art and primal dance rhythms. He has a Japanese DJ fellow at the back of the stage, "mixing" DVD images live to the screens above.

But Beck's acoustic set was the most ingenious. He starts with Nobody's Fault But My Own played on a small hand pumped organ box thing, with an audience volunteer pumping the bellows. This slow heartbreaker becomes a chain gang blues as his band mates help him cope by converging behind him to clap and stomp a beat that supports the forlorn character of the song. He moves on to a couple more acoustic songs, becoming a coffeehouse singer as the band mates become patrons at a table, sipping wine and coffee, oblivious to the entertainment. Then something sublime happens. As he sings The Golden Age, we begin to hear tinkling of glass, and note that the patrons have begun to tap their glasses in time and to run fingers around the rim of wine glasses, providing a very subtle accompaniment. Beck then moves on to Clap Hands, now with a growing rhythmic cacophony of five players using glasses, bowls, spoons, and the table to perform a percussion jam of beauty and power.

Beck and band finish off with a set of stomping rhythms that confirm Beck as one of the blackest white guys around. By the end, twenty or so kids are on stage, dancing, helping with percussion, singing choruses.

"A splendid time is guaranteed for all" as John Lennon sang on Sgt. Pepper's Lonely Hearts Club Band (okay, it's the wrong album reference, but what the hell).