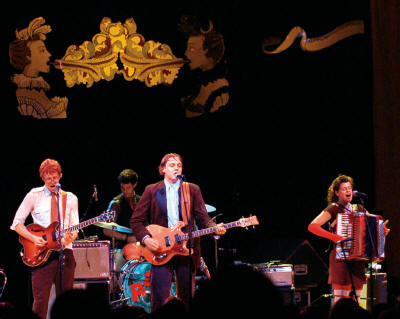 Review Snapshot:
Arcade Fire prove that they are worth all the hyperbole that surrounds them by giving a fantastic performance that will be remembered by all in attendance for a long time. Over-rated? No.

Full review: Unlike some, when Arcade Fire toured their debut album I was unable to travel to England to see them live, and I even missed out on their now legendary Electric Picnic set. I had never anticipated a gig as much as I did this one, their first of two nights at the Olympia Theatre, a venue they supposedly chose because of its "international reputation". Expectations were high, on this the first gig of their European tour.

Support on the night was provided by Patrick Wolf. I was surprised by his flamboyant appearance and performance. I do not think many could have expected to see a grown man take to the stage wearing shorts with glitter on his legs. More importantly, however, I was surprised by the quality of his music. Once sound problems were overcome (for the most part) after the first track it became clear that Patrick Wolf is not about style over substance. He finished his short set with the eponymous track of his new album, The Magic Position. Its camp pop would fit snugly into the charts, but I'm not sure if his leg-stomping dance that accompanies it could be as big a hit.

At 10pm the ten members of Arcade Fire's touring band took to the stage. They opened with 'Keep The Cars Running'. Any worries of this gig not living up to expectations were dismissed immediately. Throughout the set the band constantly swapped instruments, made use of megaphones and even played some instruments that I had never seen before. I was later informed that Regine had used the fantastically named hurdy gurdy. The set-list contained all tracks bar 'Windowsill' off the new record and another 6 songs of the debut, most of which were saved until the second half. This was much to the relief of the audience, many of whom were concerned as the usual curfew for Olympia gigs of 11pm drew closer. 'Laika' was the only notable omission from 'Funeral'.

The tracks from Neon Bible had an added intensity on the night. The live renditions enhanced the songs. Despite previously being somewhat indifferent to 'Ocean Of Noise' and 'My Body Is A Cage', I found them so moving live. 'My Body Is A Cage' was one of the highlights of the set for me. Flooded in red light, the song was delivered with raw passion and emotion. Hairs stood up on the back of my neck as Win delivered the line 'Set my body free; set my spirit free' over and over to a back-dropped of the organ and drums.

In contrast to both of the albums, much of the night was about joyous celebration. From Regine's dancing during 'Haiti' to William Butler's scaling of the gallery boxes, it was not about reflection but jubilation. This culminated in the sing-along to 'Wake Up'. It was a special moment as the 1000+ fans packed into the Olympia theatre with their hands in the air, and their heads thrown back, joining the band in the "whoa oh"s.

And then at 11.40, forty minutes after the supposed curfew, Arcade Fire finished their second encore with Neon Bible. A perfect ending. We streamed out onto Dame St., in the collective knowledge that we had experienced something special. Despite being built up so much by the media, almost to the point of absurdity, they still managed to amaze and delight.