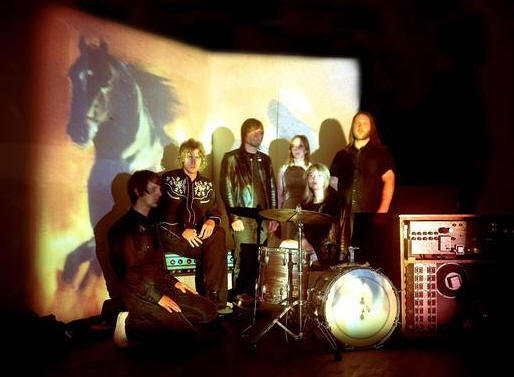 Review Snapshot:
Sundays at this time of year in 2006 usually meant there was a truly brilliant gig happening in Whelan's with Nada Surf, Okkervil River and Final Fantasy almost blowing the roof off the joint as they presided over the Sunday Service. 12 Months later the Besnard Lakes act more like a damp squib.

Full review: It seems to me that one of the functions of a good record producer is to hold back a band's more over the top and bombastic instincts and as someone who has done production work with sonically ambitious bands like the Dears and Stars you would expect The Besnard Lakes' Jace Lasek to know when to dial things down and not finish songs with a 15 minute guitar solo. In fact, listening to his band's second album The Besnard Lakes Are The Dark Horse you get the impression that Lasek and wife/musical partner Olga Goreas slaved away in the studio they own in Montreal (and let's just ignore any obvious comparisons to other spouse-led bands from that neck of the woods shall we?) for an age. The result was to strike the successful blend of grandiosity and space that made their Low-goes-shoegaze-with-the-Beach-Boys-providing-harmonies sounding album one of the year's finest efforts.

It's a shame then that when the couple, along with the other 4 members of their band, hit the road to promote said album they decided to forget that less can be more and for the majority of their set at Whelan's subjected the audience to far more self indulgent masturbatory guitar noodling then is healthy for anyone. They sounded like they had more in common to older compatriots such as Rush (whom I believed the Canadian government had decommissioned as part of the classic rock test-ban treaty at the end of the Cold War to prevent its spread into Eastern Europe due to the fall of the Iron Curtain) than any of their other well known Montreal contemporaries. Things got off to a bad start when they finished their opening number with 3 guitarists soloing over each other and for the most part they didn't really let up after that.

And it's that "for the most part" bit that's the most frustrating because when they did dial things down a tad they sounded really rather good. "Disaster" is a brilliantly constructed slow burner and perfectly showcases Lasek's graceful falsetto set against a backdrop of softly strummed guitars and fuzzed up bass.

Unfortunately those moments of discretion are few and far between and I spent most of the gig glancing at my watch and wishing I'd brought some earplugs. Most disappointing gig of 2007 thus far.