Interview with The Prescriptions

Dublin band The Prescriptions step up to the CLUAS tape recorder... 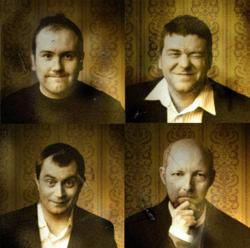 Gareth Maher caught up with The Prescriptions recently and chewed the cud on influences, song structure and fitting in on the Dublin music scene.

The first thing that strikes about the band's 'Pro Bono Publico' EP is the deep rooted vocals, for the simple reason that it doesn't come across as a bunch of teenagers blasting out indie pop tunes. Are the vocals something that the band tries to work the songs around, in terms of tone and structure?

Niall: Yes and the vocals are often reworked or updated as arrangements for songs are tried out. The reason for this is that the band believes a strong lyric and vocal are central to a good song.
Frank: Usually, but there's no hard and fast rule - sometimes the vocal melodies and lyrics will dictate where a song goes, but other times the vocals change to accommodate musical ideas or structural changes that we decide to go with. Whichever method we end up using, as Niall said the vocal always ends up central to the song.

The backing vocals also add an extra layer to the songs, almost complementing the lead vocals. Is it an important tactic for the band to make every member heard?

Phil: Only two of us sing, but it's important for all band members to be heard in the music. Backing vocals can add textures like on 'Love Your Enemy', but only when it fits the feel of the song.
Frank: It also doesn't have to be just Niall or Phil on vocals - we're open to bringing in other singers to achieve the right blend of voices for a song if needed. Musically we don't exactly go out of our way to make sure everyone is heard in every song, but it is important to us that each of us is satisfied with our input.

With most new bands that crops up, there is obvious comparisons to make with more established acts. But The Prescriptions very much have their own sound. Was it a conscious decision to sound unique, or did it just derive from jamming sessions and recording?

Geoff: Nah, it wasn't really a conscious decision. Everyone has come from a different musical background and the common ground is hammered out in the studio and rehearsal room.
Niall: I think it helps that we're quite self-sufficient in terms of writing, recording, producing and mixing all our material.

On the link page on your website, you say 'Need we say more?' about a link to The Band. Are they heavy influences on each member of your band?

Niall: Well I've seen The Last Waltz about 500 times. Draw your own conclusions!
Phil: Well, like their name suggests, they're a good blueprint for any bunch of musicians!!
Frank: Something that sets The Band apart for me is the fact that they were a group of individually strong musicians. Everyone had a unique personality and it all comes through when you hear the music. They were out of step with what was going on around them at the time but they weren't bothered by it - they made the music they wanted to make, and I think it's because of this that I identify with them and find their music timeless.

Who else would be the type of musicians that you as a band aspire to make music like or use as an influential backbone?

Niall: Changes all the time. I'm still first and foremost a fan of music. At the moment I'm listening to Joni Mitchell and Steely Dan. Donald Fagen is a songwriting genius! Also on the Irish scene Damien Dempsey is my favourite artist.
Phil: Music of the moment for me is Wilco, Sufjan Stevens & Will Oldham.
Geoff: For me it would have to be Tom Waits, Steely Dan, Super Furry Animals and Wilco. All good stuff?
Frank: It changes all the time for me too - at the moment I'd say Tom Waits, Elvis Costello, Nick Cave & The Bad Seeds, Peter Gabriel, Pink Floyd and Bill Evans. It'll probably be different next week?

The vocals are distinctive, the musicianship is top class but the lyrics are what will surely reel your listeners in further. How much input from each band member is recognised in the songwriting process?

Niall: I usually provide the sparks i.e. lyrics, melody, chords, but then the lads tear them to shreds until the songs start to gain their identity. Alternatively I'll use a chord sequence by Geoff, Frank or Phil and write lyrics to an already existing musical idea. I'm good as an originator but not so good on quality control.
Frank: I come in on quality control! I'm a stickler for detail and I'm not happy to let anything go lyrically if there's a better alternative, so there can be a fair amount of head scratching sometimes when it comes to lyrics. The lyrics represent us collectively, so we set the bar high.

'Black Sheep' is for me one of the best songs of the year. What was the inspiration for it? And how did it come to fruition?

Niall: As a young teenager I went to local discos where sometimes rival gangs came to cause trouble and kick heads. Even then a lot of them were headed for violent lives. Fast forward 10 years and I found myself playing gigs in various places that these guys frequented. They had no idea who I was and would tell me through broken teeth how much they loved the band. Some were reformed, some were jailbirds, some are now dead but all of them were f*cked up because of their past deeds, hence black sheep.
Geoff: Drunken banjo? Sure what else would you put on an Irish murder ballad?
Frank: Black Sheep actually started out with a completely different feel, as a kind of rockabilly shuffle, and wasn't particularly good! We were trying to figure out what to do with it and one day I put on 'High Water' by Bob Dylan and said "what if we do that with it?" And so the menacing drunken banjo was born?

Describe a typical rehearsal for The Prescriptions?

Geoff: Usually, myself and Frank get wasted, Niall polishes his throne, Phil plays guitar in front of the mirror and we sit around and drink tea and wait three or four hours for the drummer of the day to arrive?

Is there a desire to involve different instruments and experiment with song structures whenever a new song is penned?

Phil: Once we get to a certain stage we look to see what different or unusual instruments we can use to enhance the song. Song structures are always up for experimentation!
Frank: We always want to broaden our horizons, musically and sonically. I really admire artists and bands that can reinvent themselves - The Beatles and Bowie would be good examples for me. We see each song as something unique and think the same way in terms of the instrumentation we use, so anything goes really - it might be a ukulele and bagpipes next if it suits the song! Probably not though?

The band's sound is closer to Americana than to indie rock. Do you find that it's difficult to attract a fan base in a city like Dublin? Do you almost feel like outsiders of the current scene?

Niall: Every nation on earth is in some way represented in America. It is a vast cultural melting pot. Country, blues, rock n roll, jazz, punk, hip-hop, all have root sources in America. I tend to listen to a lot of American music. As regards a fan base in Dublin it can be difficult because of lack of venues, exposure, the cost of gigging etc. but I think radio play is still the best way to attract a fan base in Ireland. I have very little idea of what the current Dublin scene is like so the answer is yes.
Phil: I think the influence of American music or Americana is heard in most modern music. As to being outside the Dublin scene, from my experience it's changing all the time and there are many different scenes; like the friends of the Frames or the new psycho-fest crowd, we can focus on making the best music we can and the scenes will look after themselves.

What are the big plans for the band? An independently released album?

Frank: Yes, we're recording demos for an album at the moment. We hope to have it out before the summer, but it remains to be seen if it all comes together in time. There are also a lot of external factors to be dealt with such as manufacturing, PR, distribution and financing, so it's a bit of a juggling act to make it all happen in the right sequence!

Interview was conducted by Gareth Maher