This article was first published on CLUAS in March 2000

Early on in Mr. Dempsey's career CLUAS got to hook up with him... 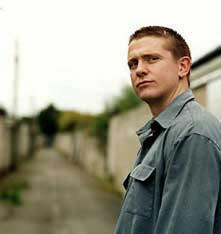 Damien Dempsey is a Dublin singer-songwriter whose music is one part reggae, one part trad / folk, and one part uniquely his own. He is utterly different to any of the other singer-songwriters around at the minute, and he towers above them. At his best, he writes words that can make you laugh, cry or just nod your head in amazement that someone has expressed so effectively what you feel. His melodies could stop your heart. On stage he just stands up and sings these songs as they need to be sung - without artifice and with the subtlest of rhythmic inflections. He really is something special. At the age of 24, he might not hit the nail bang on the head every single time, but give him some space to grow and he could be one of the true international greats. Up there with - wait for it - Bob Marley, Neil Young, Nick Cave. No joke.

However - he has just released an album called 'They don't teach this shit in school' and I don't like saying this, because I would hate to damage his chances of success in any way, but it has been a disappointment to me. Here's someone with enough genuinely great songs already to have released something as good as, say, 'Highway 61 Revisited' or 'Talking To The Taxman About Poetry', but this recording falls well short of that mark. I fear many real music fans, who if they saw some of the Damien Dempsey gigs I've been at would be shouting his praises from the rooftops, will hear songs from this album on the radio and won't be inclined to give the music a second listen. It's a terrible shame, because the fault is not with the material itself, but with its presentation. The big problem is the accompaniment - rather than highlighting what's good about the music, it obscures it, and listening to the CD is like trying to appreciate a fine meal while smothered with a head cold. I'm no purist and I've nothing against bands, and I'm sure there's a band somewhere that could add to the music, but the band on this record does not. It's not that they play badly, but what they are playing is so inappropriate that the songs and the accompaniment cancel out the good in each other. All the rhythmic subtlety is lost against a generic dance-y/funky beat. All the songs are hampered, and some are ruined ("Dublin Town" in particular - "Chillin'" survives the treatment best).

Also, Damien Dempsey's voice is sweet and powerful live, but on the record it is not. It's dull-sounding, and comes perilously close to being out of tune in places. It's obvious that the band's parts (or else a click-track) were recorded first, and I suspect that the resultant loss of the control of the feel and rhythm of the song has affected his performance.

As you can see I brought some baggage to this interview. It turned out that the man in question is a very agreeable fellow indeed, and I felt very bad when I was outlining my misgivings about his new direction. Anyway, here's some of what we talked about "

How do you find playing with the band, is it a big change from playing on your own?
I enjoy it. It jazzes the music up a bit y'know. I think it'd be more accessible now, because a lot of people won't listen to a fella on his own with a guitar, they want a bit of rhythm.

How much do you have to do with what they're playing? Are they just left to work something out for themselves?
They work something out and if I don't like it I tell them. They're cool with that but most of what they do is fine, I don't have to say nothing.

Wasn't the gig you did in the Lobby in Cork recently on your own?
That was just me yeah - sometimes it's lovely to go and do gigs like that as well, just go out to a crowd and 70 people just stare at you and there's not a whisper out of them. Brilliant, you have that tension.

Do you reckon the band is going to stick with you? I've seen the drummer playing with Nina Hynes - are they your band now?
Ah no they're session, they play with anyone they like who's paying them.

Do you reckon you'd like to sort yourself out with your own permanent band?
Maybe - it's a lot of hassle though. These fellas are very professional - if you ask them to do something they just do it, there's no egos there. They turn up on time, whereas a lot of other musicians are very unreliable. You're having rows with them then - they might be overplaying and if you tell them that they're sensitive and it's all hassle, so for the moment I'm very happy with these guys.

I saw King Sativa at your album launch and you thank them on the album as well - I thought it might be interesting to see you playing with a reggae band.
I played with them before in Doran's but we only got about an hour's rehearsal before it, so I'd say if I got a day or two with them it could be good. They're a great band.

And how are audiences reacting to the band? Do you notice much difference?
I think audiences dig it. Once they can still hear my vocal and guitar, that's what the purists want. Then when I do the few songs on my own they really stand out.

Are you happy with the recording?
Yeah - I am - I think the next one will be better.

I think that it loses a little bit - I think it sounds better live.
How do you mean live - just on my own with the guitar?

I just don't think it kicks as much ass on the record as the few times that I've seen you when I thought you were best.
I know what you mean - it'd get to more people with the band I suppose though. Get played a lot more and there's only certain people - purists - who'd listen to a fella on his own with a guitar.

" by a long way. And when I put on your record I thought, well, I'd rather go see him live
So I should do a live album.

Well, I just wanted to see how you felt about the recording yourself.
I'd love to do an acoustic album alright, just on stage. That'd be nice.

You're obviously a reggae fan, and the very positive reggae attitude to life seems to come through in your own writing, would you agree?
Well everybody I've ever been into has been very positive - Bob Marley, Christy Moore, Phil Lynott. I know it's the only way to live as well, I've realised that in my own life.

Did you read the recent interview with yourself in the Event Guide? The writer accused you of being politically na?e?
I don't think I'm being na?e now. I'd love to sit down and have a discussion with him about it, and he could look at anything I've said and try to prove me wrong, any of the statements I make in any of the songs.

He mentioned the 'Irish victim' thing in some of the songs?
Well I look back and I see my people were victims, but I'm not just talking about the Irish I'm saying international victims of colonialism. The English have been just as oppressed as we have. I think the poor people over there should realise what was done to them by the ruling classes. They've just been used by the ruling classes to go and rob around the world.

You're obviously quite aware of what's going on around you, you obviously can see a lot of things wrong with society, but do you have an alternative picture in your own head of the way you'd like things to be?
I'd like to see like a socialist Ireland, but I don't think it's going to happen -there's too many greedy people. James Connolly had the right idea, he would have liked to see the workers from north and south come together and fight for better standards and I'd like to see that myself. But the rich people always seem to preach bigotry, to use the working classes as their instrument. I'd like to see ordinary people getting a better deal for themselves and standing up to the fat cats.

Obviously the fat cats are getting fatter all the time in Dublin these days. How do you feel about Dublin now and do you think things are changing for the better or the worse?
There's more jobs, but most are low income jobs. There's less people unemployed but they might be getting about 20 pounds more than they were on the dole. They're working long hours for this, so they're not really much better off, with the way house prices and the price of rent have gone up - and the price of the pint y'know.

Do you find it less pleasant living here now than you used to?
Not really. I think drugs have done a lot of damage, though. Drugs are weaving their way more into society. I think it's becoming as popular as alcohol for teenagers, and alcohol is bad enough.

Despite dabbling yourself at one stage you're obviously quite against it.
I am.

So do you have any definite opinions on legalisation?
I probably reckon they should legalise cannabis, but nothing else. It only does you damage, people don't need it at all. You're better off doing an hour's meditation and clearing your head. You'd feel much better than you would doing drugs and you'd be alright the next day, you wouldn't be wanting to throw yourself into the Liffey.

Obviously you've had more bad experiences than good "
Yeah, definitely. When it comes to popping pills, probably 90 percent bad. And people say they're not addictive - I still have yearnings for them. Especially after a few pints. I don't think you ever lose the yearning for them.

So do you have any musical goals? Any master plan?
I suppose there's some stuff I'd love to - if I done an album half as good as it, like 'Talking Blues' by Bob Marley, or Thin Lizzy's first album. I'd like to just do my own stuff and be different to anyone in the world. I just want to write the best songs I can, and maybe educate people through the songs. Young kids might listen to the lyrics and learn shit they wouldn't learn in school y'know.

I stayed for the gig after the interview, and it was good. The band gelled a bit better, but still trampled all over most of the tunes. The two unaccompanied songs reminded me of just how good Damien Dempsey really is. 'Factories, Trains and Houses' was just incredible - it's a song you can imagine Luke Kelly singing, and I can't see how even he would have sung it any better. So, if he's playing near you, he's more than worth going to see just for the unaccompanied bit in the middle of the set - and if he's playing solo, go and be amazed.