This article was first published
on CLUAS in October 2008

Interview with Noah and the Whale

An interview with Charlie Fink of Noah and the Whale...

On October 28 Noah & The Whale bring their unique blend of folk to Whelan’s in support of their UK top 10 album Peaceful, The World Lays Me Down. Here Steven sits down for a (very) quick chat with Charlie Fink. 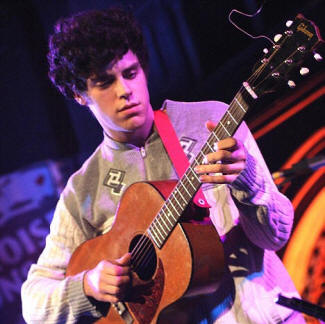 Peaceful, The World Lays Me Down, is one of those rare albums that seems to have character and depth from the very first listen. Generally, that type of album comes from a band that have had years of experience crafting songs into albums; how have Noah & The Whale produced an album of such charm despite being together less than two years?

We had a pretty clear vision of what we wanted before we went to record those songs. It was a very quick process and we were only in the studio for about 3 weeks. We were all pretty excited about it immediately.

Both Five Years Time and Peaceful... have charted in the UK Top Ten, how does this compare with your expectations for both the single and the album?

I have literally no idea how that happened, it’s incredibly weird. We've never aspired to that so it seems particularly odd. It’s not gonna change how we operate as a band though, we're still doing things the same way just more people know about it,

Yours is the first album Young and Lost Club Records have released. How would you describe your relationship with the label, given that you had to place so much faith in them and vice versa when it came to releasing Peaceful...?

I couldn't imagine doing it with anyone else. They're the best label in the world. They have, as far as I'm concerned, the perfect approach and ethic. We're very flattered that they picked us.

To support Peaceful... you’re doing quite an extensive tour including Whelan’s in Dublin on October 28th. Is it an aspect of the music business you enjoy or do you prefer the comforts of a studio?

I love touring. I love meeting the people who listen to our music and seeing them enjoy it. That said the studio is the place where I get the most excited.

Laura Marling has been known to join you for the odd performance, what does she add to your live sound and on Peaceful...? [/inevitable Laura Marling Question]

Laura is one of the most sensationally talented people I have ever met and she's a real artist. Sadly she no longer sings with us but I know she's headed for great things.

You have been compared with everyone from Beirut to The Magic Numbers yet listening to a track such as Rocks and Daggers one gets the impression that your own influences are a little more diverse, would that be fair comment? If so, who are they?

I love a lot of music. I love Kanye West as much as I love Jeffrey Lewis. I love Pavement as much as Vashti Bunyan. I feel that surely if I am influenced by any of those guys it'll be in equal measure and it doesn't mean anything if it sounds slightly more like one than the other. Also I think a lot of people quote their influences as being much more trendy or fitting than the music they really listen to. People shouldn't believe it either. Folk music doesn't even really exist anyway, at least I've never heard it defined in a way that’s all encompassing or even consistent. I mean story telling seems to be a theme but then you can tell a story whatever music you make.

Of the current crop of musician/acts, are there any who really made you stand up and take notice?

Adrian Orange and Diane Cluck are the two people on this planet who I can safely say are geniuses.

Likewise, are there any Irish bands that have caught your attention at the moment?

Can't think of any right now but I'm sure there's plenty.

Finally, given that you take your name from a composite of Noah Baumbach and the Squid & The Whale; is there any possibility of you following Radiohead’s Jonny Greenwood path into the movie scoring business?

That’s pretty much my dream. There Will Be Blood is my favourite film ever. We're making a film to go with the new album we're working on called First Days Of Spring.