A review of their album 'Voices of Animals and Men' 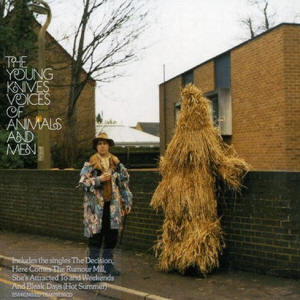 Review Snapshot:
Stylistic leaps and bounds - and constantly surprising mixing and production - turn a collection of thin songs with strong lyrics into a small, strange creature with an intimidating intellect hidden behind endearing quirkiness and sporadic behaviour. Hits you from all sides and always in the sore points.

Full Review:
"We definitely want to be seen as rock's answer to Robin Hood, taking influence from the rich arty types and making it good for the poor?" (www.myspace.com/theyoungknives)

Bordering on the insulting, this statement from the band's Henry Dartnall encapsulates perfectly everything about the new sensationalist's favourites The Young Knives, both personality and music alike: they're not only arty, clever and witty, but confident, quirky, accessible, not forgetting self-assured, affected and pretentious. Good? Bad? Brilliant.

An album of angular quasi-art guitar pop/rock, Voices of Animals and Men is a drug that brings you to new places and has you crawling back for more and more highs. Hallucinatory images, cold sweats and munchies are not necessarily included, but an album like this tends has a different effect on you every time you listen, so finding yourself climbing the walls to the sounds of paranoid 'Here Comes the Rumour Mill' is almost as likely as finding yourself spaced out in some outer reaches to 'Half Timer'.

For fourteen addictive tracks, the Oxford trio spout the sort of Englishness that rarely comes without the words "quintessential" or "quaint": not just in accent, but also in attitude, lyrical references, songs about tailors, coversleeve images of Morris dancers and the persistent spectre of social inertia. Yet they are as far away from Artic Monkeys or the Kooks as you are likely to get, taking you from images of twee English life to images of death through the twistings of a talented lyrical tongue.

From referencing TS Eliot in one song ("?these are the pearls that were her eyes?") to character insights in the next, from turning parental disapproval into a bar-room-type brawl ("You were screaming at your mum and I was punching your dad.") to rather disturbing collages of dead people's faces, to "wearing Faberg?on your way to Covent Garden" and "sitting pretty drinking Evian", the album is a mix of the banal and the extraordinary, the superficial and the profound. Sometimes it's just downright clever. And they know it too.