A review of their album 'Love Life' 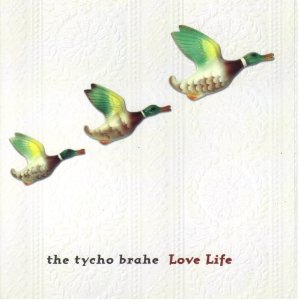 So much for the Tycho Brahe. With their album - 'Love Life' - they manage to produce one of the best albums to come from the Irish music scene this year and then they ruin the good work by spawning possibly the worst. Frankly, the Tycho Brahe took it a bridge (or maybe in this case a middle eight) too far. Their new collection, the cleverly packaged and immaculately produced 'Love Life' is a double, a loosely thematic double too, with one CD dedicated to Love and the second to Life. It's an aural equivalent of the fabled 'Game of Two Halves' blessed and cursed in equal part with very marked peaks and troughs.

The Love album is top notch left field odd rock fronted up by the gorgeous vocals of the delicious Carol Keogh. Frankly, this woman is a star. Keogh has a very broad musical range - on 'Steel Wheels', the album's bouncy New Order driven curtain raiser, and the rooty 'My father the jeweller' the she does her rock chick number but she shows tenderness, she oozes vulnerability. And she does Coy too.

On Love's best moments - 'Mountain', 'Imprint', the breathtaking near acapella 'At the Pipes', and the pastoral 'Out of the blue' - Keogh comes across like a cidered up Kate Bush whispering in a heavenly afterglow. The Love album's songs are well written, the arrangements are challenging and - for the most part - the Tycho Brahe give glimpses of their influences without being shackled by them.

Sadly, things fall apart on Life, the second of the double here. The tunes run out of steam, the oddness becomes awkward and the spoken word tracks are bad Ivor Cutler. To be fair Life is not the Tycho Brahe's 'Metal Machine Music ' but it's not too short of it.

Tycho Brahe are a top class Irish outfit with a unique talent and a engagingly quirky approach to music making. On the basis of 'Love Life' it's clear that, like many before them, their talents do not stretch over a double album.