A review of their compilation album 'Singles' 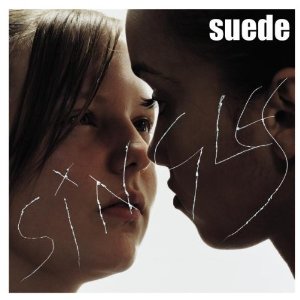 Suede is starting to wear a little thin. As Brett Anderson greys and his colleagues fill out the Suede machine has resorted to playing novelty gigs such as its commercially disastrous visit to Beijing this spring. Attitude's still not a problem however, as the Londoners' latest release proves.

Harbingers of good taste and a more talented ensemble than Oasis could ever aspire to be, Suede's electric swagger was the precursor of Britpop, though the connection between the two has been over exaggerated. Suede picked up the canvas from Morrissey's more intellectual Smiths and painted in the urban wastelands of Essex and east London. Irony was out, white working class trash was in until Oasis came along and carried Brit pop backwards to pay homage to the Beatles and the Jam. 'Much like All Or Nothing', last year's spot-squeezing piece of hard reality cinema by Mike Leigh, Suede has stuck with its theme and cultivated its harsh dead-end tackiness until the dead end poignancy of the subject matter becomes something endearing. It's a Springsteen-on-speed-and-in-London effect.

'Beautiful Ones', 'Animal Nitrate' and 'Trash' are early proof enough of the genius in Suede's canon. It's The Wild Ones and The Drowners however which seal the issue but the mixed-up newer 'Can't Get Enough' doesn't hold up beside the vintage 'Everything Will Flow'. Not on a collection which claims to represent the best of the band's output.

Brett Anderson's voice sounded better than ever on the festival circuit this summer and he's still the best frontman of his generation. The band remains cohesive, relentlessly professional and dependable. Suede never possessed the musical abilities to transcend their initial style or to develop the lyrical themes of their earlier albums however. Old masters yes, but the stuff of greatness, not really. Technically, the music is eminently competent and always well played, but inventiveness left the building when Anderson's collaborator Bernard Butler walked out. Butler's departure left a very different band to remerge in the Britpop years, streamlined and slimmed down with the lower-key Richard Oake taking over on guitar. Minus the mystique and hype of early days, a more businesslike band settled down to producing glam pop for a new generation of music fans.

'Filmstar', 'So Young' and 'She's In Fashion' has the group at a decent mid-career but tracks like 'Positivity' are hardly propitious harbingers of what's in front of the band. Time to celebrate the achievements then of a magnificent group but the future of Suede remains an unclear matter. The group is too unified to stand alone in solo parts, and as long as it's capable of filling concert halls and festival first-stage slots, Suede Ltd will stay business. But in the absence of progressive and solid albums, business will fade fast.

Check out a review of Suede live in Spain in August 2002.