A review of their album 'Harmonies For The Haunted' 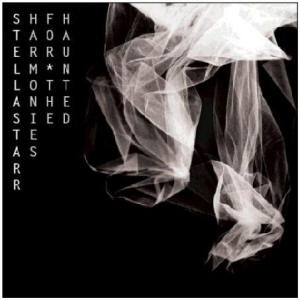 Review Snapshot:
Their first album 'Stars' was amongst the craze of the recent 80s influenced releases and it fronted the indie-disco-tastic 'My Coco'. Trouble is this doesn't do much to match the first album as 'difficult second album syndrome' has kicked in. It's always the good ones that get it.

Full Review:
The apparent move of to a darker musical plain is not such a good idea at times. It can work (as seen with Ryan Adams and his 'Love is Hell' songs) or it can flounder (like any Starsailor record). With stellastarr's second LP, even the album title let's us know that this ain't gonna be a fun record like its predecessor.

Indeed it seems that there has been a lot of heartbreak going on. With track titles such as 'Damn this Foolish Heart', 'Sweet Troubled Soul', 'On My Own', 'Love and Longing' and - the title that sums up the feeling of the whole album lyrically - 'Island Lost at Sea', it doesn't take a genius (or a lemming for that matter) to know what to expect.

Although this record confounds me on some levels, one thing is for sure and that is that it is a slow album to get into. My first few listens involved my own questioning its negative content and Goth riffs when I could go and listen to Stars instead and not be as anguished and dressed in black. The problem with this album is that it is plain MOR indie rock with some added delays and synths. It is fairly listenable but it's not going to break them in the industry that is lately full of middling bands that are nothing compared to the apparently all mighty Artic Monkeys (do not get me started!)

First track 'Lost in Time' is a ballad that starts with a lone piano and breaks through with sonar-like delayed guitar just when there's no development to the song. Single 'Sweet Troubled Soul' might attract some of the Cure's youngest fans and have the kids wearing lots of eyeliner once more with its catchy chorus and striking riff. Though even when the mood is lightened a bit there still seems to be a sense of not letting go of the pain. Filler consisting of 'Precious Games' and 'When I Disappear' doesn't do too much to dent the album's weepiness. Sometimes though - like on 'On My Own'- they get it right when it comes to allowing just sufficient release of the music's tension . The constant harmonising of vocals between songwriter Shawn Christensen and bassist Amanda Tannen works well on most songs; her honeyed twang mixed with his yelp can make some songs such as 'Love and Longing' palatable.

This album is sort of like going to Whelan's on a Saturday; you'll have a good night but there'll be so many dumbasses there that sometimes it doesn't feel worth it. Much the same, this album is listenable but it begs the question of what were the songs that they dumped like compared to these angsty dirges.