A review of their album 'Love Is Here' 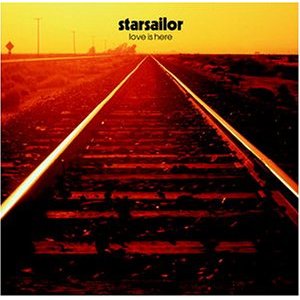 Starsailor's debut LP has been eagerly awaited by many and the band, as we all know, have been well hyped (now isn't that unusual?) as capable of great, great things. However, if you're rushing out to purchase this, feverishly believing that your world is about to change, please pause for a moment. It won't.

You're either going to love this or find this collection of songs more irritating than a simultaneous scabies and crabs infestation. However, unlike uninvited sideways movement in your underwear, the Starsailor experience can sometimes be a pleasant one. The epic, monster anthem 'Good Souls' is here in all it's glory. A marvellously uplifting tune, extolling the virtues of good old fashioned, er, goodness, backed with a trance rock beat reminiscent of 'Killing Moon' era Bunnymen. It's a tune of the first order even if Walsh's lyrics are, like elsewhere, blessed with a teenage earnestness that borders on embarrassment for the poor wee boy. I'm sure he means it, but by the sound of things he aint done much living in his 20 odd years. And 'Lullaby' is beautiful with its cascading pianos and, despite the title, stands out as one of the more rockier numbers.

In fact there's not a great deal wrong with most of the music. It's pleasant and listenable, obviously heavily indebted to early 70s Young and Buckley and these boys can certainly play. Musically the structures are those of proficient and traditional musicians. However, we have a problem. James Walsh's voice. 'Good Souls' and 'Lullaby', in particular, work because the band keep it simple and Walsh manages to keep the vocals fairly low key. Elsewhere he can be prone to producing the kind of noise that might of come out of Marc Bolan if the starchild had caught his glittery little pecker in his fly. It's a sort of strangulated, dragging Mike Scott under a door squawk. It's the kind of sound you'd think could only possibly come out of a face like Cherie Blair's.

Don't expect an album full of the quality of 'Good Souls' as it's just not there. But keepers of the Coldplay and Travis flames will warm to its inoffensiveness, its unobtrusiveness and its lack of challenge. It will not frighten the elderly and your middle aged parents will like you for buying it, but there are definite pointers that we have a band who, with time to decide what they are, could produce something very special indeed.

Check out the CLUAS review of Starsailor live in Dublin 2004.