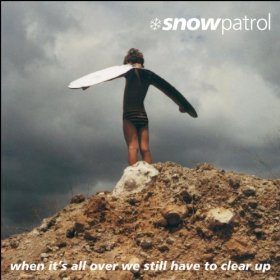 Understated anguish and sadness combined with oh-so-smooth and fiery playing pins - Snow Patrol's second album together with effortless style. 'When It's All Over We Still Have To Clear Up' starts with a dream, and closes with a dream. Although the initial dream is broken with a start and the closing dream is but wished for - it is with the last bars of the music that it finally comes - you the listener can slip off into dreamworld knowing that you are not the only one who has days (and indeed feelings) like these. As, in between dreams, we're treated to a superlative journey through the not so happy times and indeed the occasional happy time that is "the day". Although this is not the happy and perfect day but the normal day, the uncomfortable day we all live now and again when things are going wrong when they should be going right, and going right when they should be going wrong.

It is said that sadness is easier to articulate than happiness. The great are invariably the tortured souls and while it's not strictly true to say that Snow Patrol are as tortured as many of the great (and often late) artists - Kurt Cobain, Syd Barrett, Nick Drake, Janis Joplin, Dylan et al - they are approaching greatness, and will get there if this album is anything to go by. Snow Patrol are a Northern Irish trio now residing in Glasgow and they were the second act signed to Jeepster Records, home to Belle and Sebastian and their gentle ilk and, more recently, Ian McCulloch. They are a world away from most of the Jeepster output, but they do retain that gentle, almost lo-fi touch, that has made Jeepster one of the indie labels of choice. But a band are more than their record label and Snow Patrol effortlessly prove that with 'When It's All Over...' which, at this early stage is already a contender for album of the year. Where their impressive debut 'Songs For Polar Bears' saw them win not only the odd award but a loyal following (even Happy Mondays/Black Grape guitarist Wags joined them for a tour or two) it will hopefully be with this album that Snow Patrol should plough into the world of the mainstream alternative.

Opening with the snapped dream and the realisation that he'll "never fall in love again" singer Gary Lightbody sets a sombre scene with his layered light and pining vocals. Immediately the listener is reeled in. But not too strongly either ("Nobody's perfect that's what I say" he later clarifies on 'On and Off') his vocals set the scene and theme for "When It's All Over..." to perfection. Whereas the mood is initially set to be sombre and the day set up to be a bad one, it immediately turns to gold in the form of the now classic single 'Ask Me How I Am' (MTV & No Disco fans - it's the one with the dogs perspective video - with a twist!) "I take a breath and grab the phone, secretly hoping you're not home" is as true as you'll get after that nervous post drink decision to give someone a call and meet up and in it's simplicity lies one of the albums key themes: uncertainty.

The rest of the album glides along in this uncertain but quietly sure manner with 'Making Enemies' being the proud father of some of the finest delayed drumming committed to vinyl/CD this year. The track also posses the finest "yeah yeah yeah" section that has quite the opposite effect of say, a Beatles or a Beach Boys "yeah yeah yeah" harmony. Those damned Beach Boys (they're everywhere these days aren't they?) are recalled again on. 'Batten Down The Hatch' which, if it were a time and a place, would be early morning on a beach in late Spring/early Summer. The vocal harmonies and guitar melody is pure Beach Boy style and Snow Patrol know this even questioning what Beach Boys legend and pharmacists' favourite Brian Wilson would make of it all. While we're on about musical reference points, 'Black and Blue' starts calmly but quickly steam-rolls into Sonic Youth territory. Lyrically too, 'Black and Blue' recalls the nubile Sonics in its repeated "she rescues me" refrain and overbearing senses of 'why won't it happen' and second chances. It rocks! And when Snow Patrol rock they are more than capable of holding their own, with bassist Mark in particular showing signs of an early heavy metal education on Wildhearts-style bass heavy tracks such as "Chased By I Don't Know What" and the title track, which bizarrely recalls indie heroes Ride on a steroids and speed cocktail.

'Last Ever Lone Gunman' is an affirmation of beliefs - a kind of do what you got to do à la Divine Comedy's "Love What You Do" song. As for 'If I Found The Right Words To Say', while musically a bit monotonous, a certain Barry White would be proud of some of the lines ("I'd be here by your side for the rest of your life / our bodies would fall to the end of the world" etc), but he wouldn't be too chirpy about the uncertain mess that this particular relationship turns into. Relationships - good, bad and indifferent - are the chief themes dealt with by Snow Patrol, and in the sadness and hesitancy of these relationships gone wrong, they excel both lyrically and musically. At times the album recalls a who's who of loose limbed angst - Radiohead (in a good way particularly on 'An Olive Grove Facing The Sea'), the underrated Orange Can and Gomez (without the quirky blues fixation).

Snow Patrol talk softly, but earnestly, to the listener and the musical journey "When It's All Over..." takes is smoothness with an edge that reveals new tricks, twists and turns with every listen. A few tracks let the side down and in some ways take away from the albums "essential classic" status but, other than that, 'When It's All Over...' is a peach of an album and makes the thoughts of seeing Snow Patrol live this year all the more salivating.

'When It's All Over We Still Have To Clear Up' is released now on the Jeepster label.