A review of her album 'You Gotta Believe It's...' 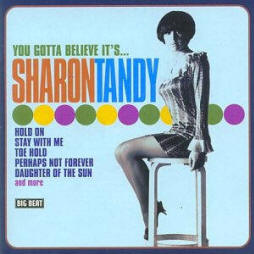 Review Snapshot:
A quality compilation of singles and unreleased tracks recorded between 1964-1969 that will be loved by fans of Sixties pop, Soul or R'n'B. Record collector anorak optional.

Full review:
My Mum used to be always going on about how the sixties were the best time in pop music, how there was so much good stuff being released every week that there really was something for everybody. "Whatever..." would be my usual teenage reply as I sulked off to my bedroom to listen to a Radiohead album or something.

Of course, the annoying thing is that as you get older, you start to realise that maybe your parents weren't wrong about everything. Now don't get me wrong, the sixties are the most over-romanticized period in popular music, but at the same time it was probably the most prolific and vibrant in terms of music aimed directly at youthful mainstream audiences. The result of this is a litany of lost gems that never quite made it. Great if you're one of those people who like to spend entire Saturdays trawling through used vinyl record stores, not so great if like the rest of us you wouldn't know your 45s from your 78s.

Sharon Tandy is one of those great lost gems and thanks to this wonderful little compilation from Ace Records entitled "You Gotta Believe, It's.. Sharon Tandy", you don't need to use all your Saturdays and spend a small fortune to appreciate her immense talent either. A contemporary of the likes Sandie Shaw and Dusty Springfield, this South-African born singer could put out grandiose girl-pop records to shame either of them.

It's definitely not all sugary girl-pop though, as you will quickly figure out by the time you get to track two, the much more-rock orientated single "Hold On" which - if Ace Records PR are to be believed - was something of a Mod anthem in its day. Sharon is capable of pulling off any sixties genre with success: R'n'B, Freakbeat, Psychedelia, whatever, it's all here.

She can also claim a special place in soul history by being the first European-based artist to record for the legendary Stax label and those previously unreleased sessions are there in all their typically raw pared down Stax glory which contrasts nicely with the lush pop material. Soul fans take note: many of these tracks were penned or co-penned by Isaac Hayes and Sharon certainly does them justice. Everybody else: yes, that is the guy who sings the "Shaft" theme and does the voice of Chef in "South Park", can we move on now? You will also find a track penned by another soul great; Eddie Floyd and one by the Gibb Brothers (that's the Bee Gees to you and me) back before their Saturday Night Fever period when they
just wrote pop songs.

Overall this feels like a quality compilation, it manages to collect 26 outstanding tracks together without a single one of them feeling like dull filler. Also rather that simply placing the tracks in chronological order they have been sequenced in a way that highlights the variety of styles presented making it sound like a cohesive, listenable album rather than just a collection of singles. It also includes the nice addition of a well illustrated booklet that gives Sharon's' story in her own words along with notes on every single track. Major thumbs up to Ace Records then. Maybe a certain Irish singer-songwriter whose lacklustre compilation was recently reviewed on Cluas could take a few tips?

The only problem with such a nicely focused compilation is that it leaves you wondering what happened next, did she record anything of note after 1969? Surely there's a case for a well recorded Solomon Burke style comeback album using the best contemporary song writing talent? Somebody get Elvis Costello on the phone, he's usually up for this sort of thing....

The above rating of the album was arrived at using Doctor Binokular's highly scientific "Accurate Music Review Rating Formula" (TM) which mainly involves observing the movement of Lego (TM) mini-figures as they are bounced about by the vibrations from the Doctor's subwoofer.