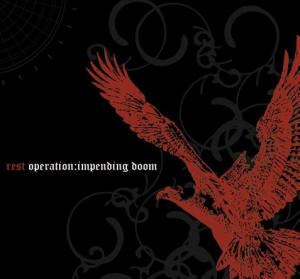 Review Snapshot:
A new bassist, a new sound and, for the most part, a disappointment. 'Operation: Impending Doom', described by the Out On A Limb Records blurb as a "mini album", does indeed indicate that Rest are embracing a new sound and a new direction. However, this record once again proves that just because something is new, doesn't necessarily mean it is better.

Full Review:
Picture the scene. You're approximately 36,000 feet above Holland. The 'fasten seatbelt' sign has just come off and you have two hours to kill. What better to do than have one final listen to the record you're reviewing before you start to write your review for CLUAS. You switch on your MP3 player and select Rest's "Operation: Impending Doom." You're half way through the opening track of the same title when your plane hits what the pilot later describes as "clear air turbulence." For four seconds the plane is in freefall and you wonder is there some sort of Kerry Karamaesque thing going on. You think perhaps you shouldn't be critical of this record after all? Thankfully, the pilot manages to do his job and get the plane under control and you rescue your pen from the lap of the German girl in the seat beside you. Calm is restored, and so are your senses.

I desperately wanted to like "Operation: Impending Doom." Having been a huge fan of Rest's 2004 debut album "Burning in Water, Drowning in Flame" I've been waiting to hear this "mini album" for quite a while. Given the limited number of instrumental groups on the Irish music scene, I wanted know if Rest were about to emerge from the shadow of, perhaps, Ireland's most famous instrumental band, The Redneck Manifesto. Additionally, Rest had an opportunity to show that, despite a change in line up, they could still produce rock music that encapsulates emotions of seismic proportions.

Unfortunately, on both counts, "Operation: Impending Doom" failed to make the grade. Firstly, before I even listened to it, the length of the "mini album" disappointed me. With just two songs (one of 6.38 minutes the second lasting 12.45) I couldn't see the incentive for people to actually go out and purchase it. However, I decided I would let the quality, rather than the quantity, of the songs dictate my review, but again, I was to be disappointed.

Those more familiar with instrumental bands than I may look for something else but for me instrumental groups should be able to tell stories, capture emotions and paint pictures without the need for lyrics, and for the most part on "Burning in Water, Drowning in Flame" Rest were able to do that, most notably on the two opening tracks "Contraceptives" and "Our Friends Know Nothing About Density". Unfortunately, neither of the songs on "Operation: Impending Doom" live up to the standards of Rest's debut. While the opening track manages to at least keep the listener's attention it doesn't have the ability to convey the message of its title (even when momentarily fearing for your life at 36,000!) The second track "Spare a Dime for Comrade Lonely Crippled Cowboy" sounds more like a jam session of various ideas that were running around than it does a structured, thought-through song.

It's difficult to write such a negative review of what is clearly a talented group of musicians. From a musical craftsmanship point of view "Operation: Impending Doom" is excellent. However, having seen Rest live, and being a fan of their previous release, I was already aware of how good the band can be and that makes this "mini album" all the more frustrating. This release needed something more than just skilled musicianship (something akin to what the band's debut was sprinkled with perhaps?) and shows that craftsmanship alone doesn't necessarily make for a good record.

There aren't many instrumental bands in Ireland, and those that do plough this lonely furrow constantly run the risk of comparison to Richie Egan & Co. The release of "Operation: Impending Doom" should have heralded the emergence of Rest from the Rednecks' shadow but unfortunately it only serves to widen the gap in the wrong direction. Perhaps next time they might consider a longer release, with more songs, giving the band a larger canvas on which they can recapture the magic of their debut.