A review of his album 'Stadium Arcadium' 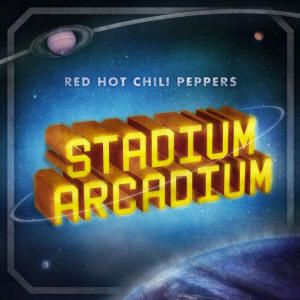 Full Review:
How to write a RHCP song; Take one set of lyrics about California, add in a rhythm section which sounds like a series of lead weights being dropped on a hard wood floor, whisk through a vocal which is half ethereal wailing and half grunting street rap, drizzle a guitar track over the top which sounds like the interference on a badly tuned television, bake and reheat as required.

Yep, the Status Quo of the L.A. Skate Surf scene is back with their latest opus 'Stadium Arcadium', or as its known round our house, 'Tedium Palladium', less a collection of songs than the script of Harold Ramis' excellent comedy 'Groundhog Day' if it were put to a funk groove. RHCP, a band who appear to spend their record label advances on gym membership, have never been big on progression in their music, preferring to refine their few signature tics to the point where all their songs sound exactly the same, a Big Mac approach to music if you will.

I wish I could tell you all about the myriad differences between the individual tracks and go all Lester Bangs in my description of how they sound but I can't. If you have heard one RHCP song you really have heard them all. Some critics have lambasted the band for making this a double album, saying that it would be much better to have released 14 tracks instead of the actual 28. I can't see their point. The only difference that would make, in my mind, is that you would end up with an album which sounds exactly the same but plays for half as long. In my mind, the band is giving their fans value for money; never mind the monotony, feel the length. You could achieve the same result by putting 'Give It Away' on repeat play for 2 hours.

For the record, the one track on this album which I think is worth listening to is 'Slow Cheetah', no I don't know what a slow cheetah is either, maybe its a big cat that runs at 45 miles an hour, anyway, it sounds like 'By The Way' cut with 'Under The Bridge' but with an acoustic guitar intro. Bet it shows up on their next compilation of career highlights which I suggest should be called, "All the Hit".