A review of their album 'It's Never Been Like That' 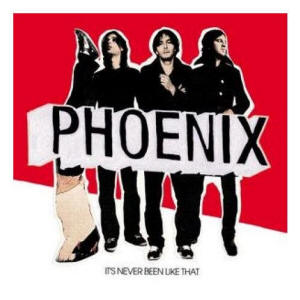 Review Snapshot:
John Lennon once sarcastically equated French rock to English wine. However, one Versailles band have come up with MOR-flavoured guitar rock as bubbly and celebratory as the best champagne.

Full Review:
If you only know French band Phoenix from their 2001 single 'Too Young' on the soundtrack to 'Lost In Translation', then their third album 'It's Never Been Like That' might catch you by surprise. Their new songs are more muscular and driving than their previous indie-politeness, and they're all the better for it.

Opening track 'Napoleon Says', apart from its odd lyrics about long johns, features a Doves-style pounding beat, and this urgency and energy is carried right through the album (the underwear references, however, begin and end in that first track)

Phoenix's strangeness and charm lies in their ability to mix happy-go-lucky MOR innocence with a more knowing new-wave swagger. 'Long Distance Call' is typical in this regard - singer Thomas Mars' lovelorn lyrics and singing style recall Damon Gough, and this band's sound is not so far from the more up-tempo tracks on the first Badly Drawn Boy album.

There's no breakthrough single waiting to burst out of this album onto daytime radio - killer hooks aren't really Phoenix's thing. Nonetheless, this is an impressive and memorable album of summer alt-rock which should allow this likeable band to build on their previous soundtrack exposure.