A review of his album '24 Star Hotel' 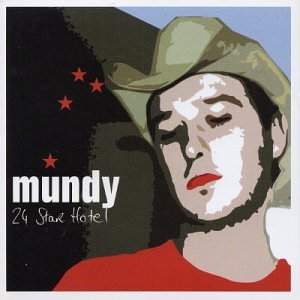 I just don't have the heart. I was going to make a brief critical comment about one aspect of Mundy's latest offering, but I can't. This album is simply too good. It doesn't deserve to be criticised. One thing I will say though is that the man has an ability to lie straight-faced, while presenting us with evidence that completely contradict his claims of being "all out of melody?". Um, sorry to say this Mr. Enright, but on the evidence of this album, the one thing you certainly don't lack is melody.

Listen to 'Drive', to the hauntingly beautiful finger picked guitar that lays the foundation for the track, or the Oasis like chorus that emerges from the beat heavy 'Addicted'. Or the gloriously soaring strings at the end of 'Healthy'. Or how about the closer? A laid back collaboration with Ben and Jason, that would be worthy of inclusion on Ed Harcout's 'Here Be Monsters'. I could continue along this vein about every track, but instead I want?..oooohhhhh feck it, c'mon people, if you're not nodding your head throughout 'Mexico', and clapping along to the (admittedly corny) break in the middle of it, you must be half dead!

Now, back to the serious stuff. In my opinion, the high point of the album occurs in the middle, with 'July' and 'Linchpin'. July is an absolute gem of a song, with a guitar that jumps and skips its way through the virtues of levi asses, and the month of July in general, with Mundy's amazingly dextrous guitar work, and Binnzer's energetic drumming complementing each other perfectly. You'll be "my my my my my my my my my'ing" all the way home from the pub after you've listened to it a few times.

Linchpin is a completely different proposition, a quietly reflective song, apparently about suicide, and the need for people to open up, and not bottle up what they're feeling: "You've gotta let me in to pull the roots / You'd better let me in to find the truth / And pull the linchpin". The backing vocals (which sound like Mundy double-tracking himself) lifts the song out of the normal insular, depression-filled angst that the topic generally brings out in songwriters, and takes it to a place where you forget you're listening to a song about suicide.

This is pretty much as perfect as pop gets, go out and buy it. Album of the year so far.