Review of their album 'Tallahassee' 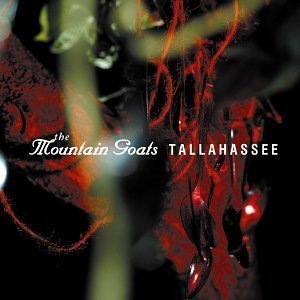 The driving force behind Mountains Goats is the enigmatic front man "John Darnielle". A very prolific act, this is the third album he has put out in the last 14 months. The two previous albums were recorded using second-hand tape recorders and sound effects and produced on such a low budget that it makes the White Stripes look extravagant! However on this release he has decided to record in a proper studio. I must admit when I first heard this news, I was worried that the stark raw beauty of his early work may be lost, but my fears were totally unfounded. His voice and guitars still sound as barren and beautiful as ever, but now have a warmer more lush gloss that only adds to the appeal.

Darnielle has a wonderful knack for capturing the lives, loves and losses of small-town people and doing so perfectly in a three-minute song. 'First few desperate hours' is a prime example of this. Sounding like an elysian mix of Bob Dylan and the acoustic side of Bob Mould, the song is a perfect nugget of acoustic folk-pop. Never too bare and never too dense, each tune is enchanting and seems tailor-made for a late night campfire and bottle of cheap whiskey.

Just as the sweet delicacy begins to grow a little tiring, Darnielle throws in a couple of songs to snatch back the listener's attention. The slurred spout that is 'No children' followed by the trashy punk disorderliness of 'See America right' provides a welcome stopgap and an opportunity for him to spit out some darker, almost spiteful lyrics.

The album then resumes the decompressed attitude from before, almost straying into Neil Young territory during 'Have to explode' and in particular 'Old college try'. The delightfully na?e nursery rhyme appeal of 'International small arms traffic blues' flawlessly disguises the darker subject matter. This interplay between sweet tune and gloomy lyrics actually succeeds in pushing forward the point of the song.

A relaxing, tuneful, lush album thrusts John Darnielle from good lo-fi performer to accomplished singer-songwriter with a great future. This man will be around for many more years. If he can make even two more albums as good as this, we might finally have found the new Bob Dylan. I did say might.