A review of his album 'Crown Time' 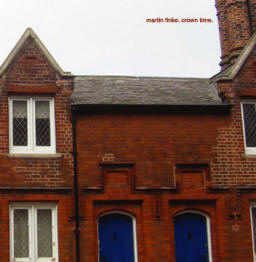 Review Snapshot:
Crown Time is another sublime collection from the left field Martin Finke and confirms him as the most criminally ignored song writer active on the Irish scene today.

Full review:
It really is a travesty of justice that Martin Finke continues to scrape together audiences of barely three figures while others in this country have gone on to take centre stage in the various large barns around the capital city. I guess that's what comes of ploughing a lonely musicky furrow more akin to the great underground song writers such as Oldham, Eitzel or Kozelek than to the sing-along strummers that the Irish take to so readily.

Mr Finke has an ever strengthening catalogue of work behind him and Crown Time marks his third consecutive album of some note. His songs frequently eschew the normal verse-chorus-verse structure to create weaving poetic tales, quite often of life in the Connemara homeland.

The music is formed around his lyrics and owes as much to turn of the 90s indie guitar bands as current day acoustic troubadours, albeit at a less frenetic pace. Throw a bit of electronic noodling and some samples in to the pot, stir around a bit, serve (preferably through headphones) and what you have is an original talent worth digesting slowly.

Whereas 2001's beautiful Let It Ring works best when taken as an holistic experience, 2003's Untended Stories contains twelve gems, as easily appreciated individually as in their entirety. Crown Time sits neatly in between the two. The dreamy acoustic based 'Aflame' sets the scene perfectly, veering off in to the minor keys just when we don't expect it. The distinctive brush style of Joss Moorkens' drumming is again evident on this track and through much of the album, providing the appropriate base to the vocal meanderings of Finke. Radio single 'Take Care' offers us the first substantial evidence of the programming which further fleshes out the music before Crown Time's first act closes with new live favourite, 'Imaginary Wedding', a simple but stunning lullaby that shows how Finke's song writing has progressed.

After the more conventional formation of the album's first four songs, the middle segment produces the feel of a sonic soundscape centred around instrumental track 'Your Only Love' with its subtle electronica and sampling. This section culminates in the quite wonderful "Smash and Grab" which includes Lara Norris's sole contribution on backing vocals and summarises all that is good and different about the writing and delivery of Martin Finke.

Album closer proper 'The People who Know' is an eight minute epic which builds slowly and completely immerses the listener in the soaring lyrics and gentle instrumentation. This song could go on for another eight minutes and you still wouldn't want it to end. After this, the cover of 'The Weight' feels tacked on and slightly out of place, even though the quality control button has not been tampered with.

As always with Martin Finke, his songs demand that the listener puts in some effort. The gold pot at the end of the rainbow is sitting there waiting to be discovered: his voice, his lyrics and the timeless drifting vibe of the music are ample rewards for the effort. It is a crying shame that the challenging nature of his song writing probably means that those small but loyal audiences will never swell enough to make him a living out of what he does so well.