A review of their album 'Front' 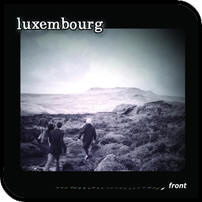 Review Snapshot:
Luxembourg have been dubbed London's 'best-kept secret' for some time now. With an album so full of brilliant pop tunes it will surely not be long before the world wakes up to them.

Full Review:
'Front' is the debut album from Luxembourg, a five piece currently based in London. For the past 5 years they have been tirelessly devoted to writing beautiful and thoughtful guitar-driven pop songs. Despite their efforts they remain unsigned to the bewilderment of their ever-growing fan base. This album has been made available of Dogbox Records, a record label run by two Luxembourg fans.

Luxembourg describe themselves as 'pop noir' - a kind of pop music with a dark undercurrent. Punching guitars, raunchy riffs and bouncing keyboard melodies are the order for the day on this record, with singles "What The Housewives Don't Tell You" and "Sick Of DIY" being perfect examples of this sound.

These tracks are punctuated by beautifully elegant songs such as "Mishandled" and "Down On A Sunny Street", proving that Luxembourg have a lot more to offer and are definitely not one trick ponies. It's on these more delicate moments that David Shah's choirboy falsetto becomes most effective and moving.

Like Cocker and Morrissey before him, Shah's storytelling lyrics analyse his life and his relationships in an engaging and witty way. 'Single' is a heartbreakingly brutal assessment of David Shah's situation - 'I can't spend another summer burning copies of my debut single in my bedroom?I wouldn't wish my life upon anyone/So let's abstain'. This is one of those albums whose sleeve notes are rarely to be found neatly slotted inside the case. Instead it lies at my bedside, constantly referenced whilst I listen to the album.

I find it incomprehensible that this band are not dominating the airwaves, playing on Jools Holland, on Parkinson, leaking from the earphones of every shy teenager locked away in his room or  playing in a businesswoman's car as she navigates through peak-time traffic. Unlike every other "obscure" band I bore my friends with, there is no real reason that this band is not massively popular. Yet still the industry stands aside when they should be clamouring for Luxembourg's signature on a contract. Someday they will regret their foolishness. An album this good cannot remain unnoticed for much longer.