A review of Low's album 'Drums and Guns' 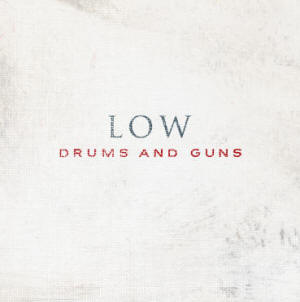 Review Snapshot:
With Drums and Guns, their eighth release in a fourteen-year career, Low prove that they deserve the tag of minimalist that The Great Destroyer nearly obliterated. This album is much less dense than most of their preceding albums, feeling like it's going to simple float apart at any minute. Despite this, a rock hard thematic subject matter keeps the album firmly grounded.

Full review:
From the title and the opening line of "on soldiers, you're all gonna die", it's forgivable to assume this album is a post-9/11 quasi-political statement. Fortunately though, the focus of this album is not in fact on guns or war, and no aspect is aggressive enough to fit the assumption. In fact the eyes of the album are aimed inside, while addressing the audience at large, the "sweet people", creating an honest and strangely exhibitionist album that thankfully does not go quite as far as assuming itself to be symbolic.

Although Low employ the same producer as in previous albums, Drums and Guns has a particularly home-recorded feel to it, or perhaps they took backwards step into the early 90s when production styles were moving out of the synth-infused eighties and into a much more sophisticated use of electronica. However, only in this decade could every detail, even down to the perfectly adjusted panning of each part, be so meticulously planned to the same end. The other difference here is the harmonic emphasis, as the seamless blending of Sparhawk's and Parker's voices create layers that are then built on. Take for example, Your Poison: it is exactly this full textured combination of voices which is the basis of the song, with guitar, bass and drums entering almost totally for emphasis. Similarly for Dragonfly: despite a fairly full-sounding backing track, the song wholly pivots on the vocals, and the contrast between them. Lyrically, Dragonfly, is half whimsy, half introspection, but it is this foundation in lyrical and musical contradiction makes it a quietly powerful and screamingly beautiful song.

In contrast then are tracks like Hachet, which has an unusually standard format for Low, instrumental backing against a fairly ordinary melodic line. Again though, what keeps this from falling into the trap of normality is the slightly off-beat guitar and odd cutting out and re-entering of the guitar and bass, not too mention the ethereal effect of Parker's voice. The idea is used again in Murderer, with its synth intro into a drum and bass backing with increasing tension and a constant build up that fails significantly to explode, ending with an almost disappointingly ordinary cadence.

Drums and Guns is a complex and musically intellectual album, so much so that it's difficult at times to know whether to enjoy it or endure it. Part of that complexity lies in its ability to sound simple and monotonous while hiding some sheer brilliance. However, after the fifth listen (or less or maybe more, you really need to be in the right mood), things begin to click and you can't help but fall in love with its dream-trip distortion and crystal-clear vocal lines. It just goes to prove implicitly that the mark of true genius is the ability to make it simple to understand.