A review of their live album 'XXV Gathering: Let Us Prey' 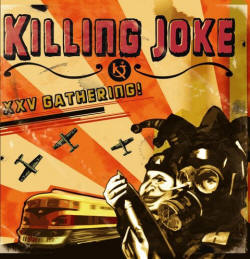 Review Snapshot: Although very effective when looking for mindless heavy rock to get angry to, this is a distinctly unimpressive album, with affected lyrics and an seeming absence of subtlety. Advice: listen through earphones.

Full Review:
Lucky for Killing Joke's post-punk madness, I was in a bad mood when I got this album. A recording of their 25th anniversary gig which took place in London's Shepherd's Bush Empire in February 2005, it's raw power recorded: something in which to just lose your little headbanging teenage-angst-filled head. However, search this album for anything exciting, original or inspiring and you will be sorely disappointed. 15 songs, almost indistinguishable from each other drill the same bass riffs and double-bass-pedalling in your head with the persistence innate to only the most melodically-challenged.

Substance is what this album lacks most, with variety running a close second. Due in some small part no doubt to the quality of the recording itself, at times the individual sounds of instruments working together is reduced to a single drone, not unlike a very rhythmic hive. You can count on one hand the number of songs in which you can actually discern a chord change. There is no clarity of purpose but to sound loud and angry, and no clarity of sound at all, except for the toneless rasping of the vocals which seem totally disembodied and independent of the rest of the noise.

Still there is a song or two which stands out from the whole. 'Communion' would be an excellent opener to a gig, if the rest of the songs didn't just feed off it so much. 'Sun Goes Down' really moves with a strong chorus and swirling guitars, preceding 'Are You Receiving' which, at track 13, provides the first entrance of a real melody, and hints towards the possibilities of decent studio work. 'Total Invasion' is more intriguing than it is enjoyable, but you'll still find it's the one you remember most, for totally unidentifiable reasons.

Raw power it may be, but this album could do with an injection of real emotion instead of affecting social consciousness and depth of insight.