A review of their album 'Ballad of the Broken Seas' 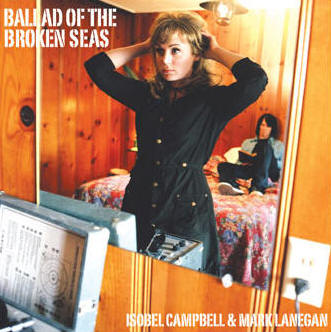 Review Snapshot:
A collaborative effort from the queen of twee and satan's minion that, although engaging, doesn't quite deliver on all of its promise.

Full Review:
Not since bad seed Nick Cave and pop queen Kylie Minogue forged a murder ballad together ten years ago, has there been such expectation over a male/female duet as that fostered by the recent collaborative effort from Isobel Campbell and Mark Lanegan. Just comparing the past band names of these two is evidence enough of the seeming chasm which exists between their 'sounds' as we know them. Campbell, flaxen of hair and voice, is a former member of twee collective Belle & Sebastian whereas Lanegan is famed for the aural brimstone he injects to Queens of the Stone Age as well as being the principal Screaming Tree. It is no great surprise then that breaths have been bated in advance of their 'Ballad of the Broken Seas' album. Alas it was not worth the potential pulmonary aneurism.

Comprised mostly of songs written by Campbell, this is an album that treads familiar territory without ever seeming tempted by the more challenging terrain that lies well within its sights. Yes there is something beguiling about two voices that seem to have been banished from heaven and hell respectively to sing together for eternity in limbo, but it's not enough to sustain an album of twelve songs, especially when both parties appear unwilling to experiment vocally. Campbell rarely, if ever, dips into her lower register and Lanegan seems intent on channelling the ghost of Johnny Cash for the duration of the recording. The disappointment doesn't end there, despite an array of instruments at their disposal ranging from harpsichord to vibraphone, the overall sound of the album is very much rooted in guitar, bass, drums & strings, the main exception to this being the whip that appears on their swaggering cover of Hank Williams' 'Ramblin Man'. Too many songs follow a predictable formula of brooding Lanegan vocal tempered by a string saturated, sugary Campbell backing vocal. Alternatively when Campbell takes the vocal lead, Lanegan is usually to be found repeating a lovelorn refrain underneath the melody line.

However, this is not a work entirely without merit. A concept album, its songs tell tales of a mismatched pair doomed to disaster but bound by fate. Even the sleeve art, comprised of snapshots from a stereotypically kitsch middle-American motel room, insinuate a one night stand which formed the genesis of the relationship documented in song. There is just no getting away from the fact that this album sounds like a soundtrack to a film not yet written. Lanegan's contribution 'Revolver' is among the strongest on the album, giving an insight into this couples mutually dependant yet destructive relationship, "I'm holding on cos you're my revolver and I dreamed of ending in a violent way". There are moments of sheer beauty and subtlety here and the marriage of these diametrically opposed voices, although destined for a messy divorce, is one that is both raw and mellifluous.

This is an album which history will look on as a defining moment in Campbell's career. Her songwriting, which in her Belle and Sebastian days could have been classed as 'letting Ringo have a go', has matured and is both confident and assured, although not quite brilliant. One for the record collection certainly, but an offering which doesn't quite seem to add up to the sum of its parts.