A review of their album 'Elevator' 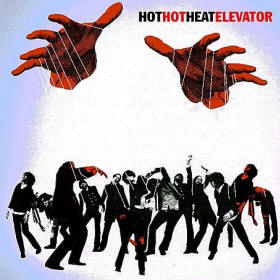 Review Snapshot:
Second albums are generally difficult, especially when your first was the kind that had people smiling from ear to ear so much that, after hearing an intro, your chin disappeared into your mouth. The follow up to their debut 'Make Up The Breakdown' (one of the albums of 2003) is surprisingly good, despite the high standards they set themselves.

Full review:
If anyone is looking for a forward progression in musical style on Elevator then look again. Much like The Strokes and Interpol, this album is in the same vein as their first, albeit much better lyrically and less repetitive. It's got punchier tunes that will once again have you humming to yourself just before you go to bed; it's kept me awake at least once it's so catchy.

It should come with a warning. Opener 'Running out of Time' rockets out of your speakers like releasing a wound-up spring and letting it bounce off the walls. On the other hand the single 'Goodnight Goodnight' has a promising verse but I can't help they couldn't have given it a better chorus, as it's just plain annoying.

Stand out track 'You owe me an IOU' is the kind of perfection that you'd think would come from some genius on the forefront of the musical revolution in the '60s, from its twinkley piano to its hollered cries of the title. 'Pickin' it Up' is yet another chunk of retro glory, organs, dumb lyrics and single strum verses and declarations of "why do I have to be bored with being foolish and young?"

'Island of the Honest Man' is as new wave/punk as they come, a belting first line and whipping chorus shows their roots as part of the 80's revival which they helped start a few years ago.

Current single 'Middle of Nowhere' is an ode to the zombie like state that touring can leave your mind. Again with the retro guitars and yelping chorus, you'd think one would get tired of it but it keeps working and this song showcases a great scrambly solo from new guitarist Luke Paquin.

'Soldier in a Box' has a hyper build up, then lags and then kicks into chorus and does it all over again but the spoken verse that explodes into "oh no, oh no" will cause some limb moving in rhythm at the least.

The sub-ska of 'Shame on you' breaks newish ground for the band musically and closer 'Elevator', much like 'Cairo' on their debut, is a subdued affair that's built around Bays' piano into a stiff ballad about life's ups and downs.

All in all you should buy this. I don't care if the word 'pop' makes you feel like washing your mouth with soap. It's no 'Funeral' I'll give you that, but it's not looking to be something of deep meaningful either. It just wants to get you moving or humming and it succeeds. In fact it won't give you an option. There is some filler, but by normal standards they're still good songs. The retro feeling that accompanies each one adds a freshness to the album, contradictory as it sounds. Just get it. And dance.