A review of their album 'The Enemy Chorus' 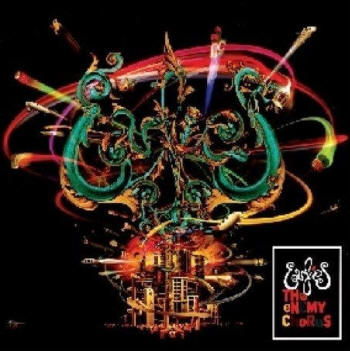 Full review:
When producing movies such as "Top Gun" the late and highly unlamented producer Don Simpson avowedly set out to create a series of great movie moments. A case of point - the script for "Top Gun" itself was only 18 or 19 pages long but Dirty Don reckoned that if you strung together enough memorable scenes, particularly heartbreaking clinchers with Kelly McGillis to seal the deal, the movie would gross. And "Top Gun" did gross. On several levels.

In tone, approach, and set up the Earlies, half Burnley half Texas, follow in the feet of a long succession of British art pop outfits, bands that make a virtue of shoe-gazing but amid all the art for art's sake could leaven out the dark stuff with the odd hit single - late sixties there was Badfinger and latterly we're looking at the likes of Spiritualised, Elbow, the Verve, Doves, Talk Talk. If we set aside "Gone for the most part" (a truly discordant piece of instrumental carnage) "The Enemy Chorus", the Earlies' second album, is the band's attempt to pull the same trick beloved of the dark departed Don - seducing the listener with a string of interlinked magical musical moments that will linger forever and somehow gel into an album's worth of coherent material. However there's a distinction here in that instead of trying to create their own magic the band simply dip into other peoples' catalogues and nick their best licks, choruses and middle eights.

There's nothing wrong with being derivative, even highly derivative - there are too many Dylan copyists to mention here, Sean O'Hagan and the High Llamas bow at Brian Wilson's feet, while Interpol and a host of others fly the Joy Division flag. However the Earlies are a too obviously selective in terms of how they use other bands' influences, and, let's call it as it is, their best chops. Instead of the listener wondering at the depth of the album's arrangements - and they really are ornate and well conceived, "The Enemy Chorus" becomes a "where did I hear that before?" exercise.

When this band keep it simple and trust their own abilities, on ballads like "The ground we walk on" and "Broken chain", the Earlies produce really heartfelt glowing sounds. Their vocalist, Giles Hatton, has pipes to die for- he's in the same distinguished league as Jason Pierce, Guy Garvey, maybe even Paul Carrack. The melodies are simple, the sentiments heartfelt, and in the midst of these two timeless little wonders you feel that this is a band destined for greatness. Sadly, the rest of the time they indulge in a musical smash and grab. With "Burn the liars" the Earlies make an elongated version of "A day in the life's" middle eight and top it off with a chorus that could have been written by Marmalade, another bunch of Beatles clones. "Foundation and Earth" is basically a Sufjan Stevens mariachi brass figure, "Breaking point", and the album's oriental motifed instrumental closer, fell off Death in Vegas' "Contino Sessions".

The Earlies have all the gifts to climb the greasy pole, - the talent, the nous and the will. However "The Enemy Chorus" is ultimately a frustrating proposition, a shameless pick and mix exercise that stunts the development of this talented band and devalues the musical moments it sources.