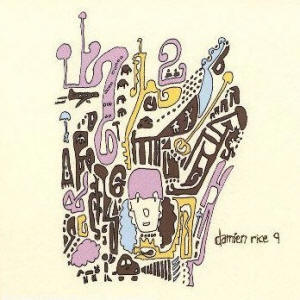 Review Snapshot:
Frustrating yet fulfilling, Damien Rice has released his sophomore album '9'. It is a record that will delight some of those who have waited patiently for the last five years and yet leave others wondering why they bothered waiting at all. All parties should take note though, 'O' version2 this is not; fans of 'Cannonball' and 'The Blower's Daughter' will be, for the most part, disappointed. However, one gets the feeling that may well be the point that Rice is trying to make with '9'.

Full Review:
Fans of Kildare songsmith Damien Rice have had to endure a frustrating five years of rumours, throwaway teasers and broken promises but on November 3rd this year Rice released his second album, '9'. Since the release of 'O' there have been many changes in the music scene, with singer-songwriters proliferating stages and charts worldwide, to the extent that it has almost become a dirty word for some. However, Rice shows that absence can not only makes the heart grow fond, but it can make the foot tap and opinions change.

First off, a warning to fans of 'Closer' and 'The OC'; there isn't a 'Blower's Daughter' on this record, despite the fact that many of the songs have been around for as long as the aforementioned. One suspects that this is a deliberate ploy by Rice and the inclusion of live favourites such as 'Me, My Yoke & I'; a song about the joys of self-love, and 'Rootless Tree' with its 'F**k you!' chorus serve to emphasise the shift in the writer's mindset from 'O' to '9'.

That's not to say there aren't songs on here that aren't going to be played off the radio. The lead single 'Nine Crimes' is a perfect example. This simple little song manages to burrow its way into your consciousness and before long you're singing it on the DART, in the office and, most worryingly, in the bathroom. Then there's the foot tapping 'Coconut Skins', unlike anything Rice has released before with its up tempo beats offset by lyrical whimsicalness ('You can sit on chimneys, put some fire up your ass'). It's unexpected, it's unlike 'O' and it shows a progression in musical craftsmanship, no doubt helped by the fact that the rest of Rice's band sound as if they are far more comfortable in their skin than they were on 'O'.

In fact, it is only when this album drifts towards 'O' territory that it weakens. 'Grey Room' has no place on this record; it sounds like something recorded in the demo sessions for Rice's debut, as does the penultimate song 'Accidental Babies'. The latter evokes the same imagery as 'Cannonball' with the lines 'Do you brush your teeth before you kiss? Do you miss my smell?' It's not a bad song, far from it, but it doesn't reflect the progression that comes across on the rest of '9'.

Love him or hate him, and it seems that you must sit in one camp or the other these days, you cannot deny that Damien Rice has created something unexpected in '9'. It may have taken five years to come to fruition, but '9' represents a progression, in terms of craftsmanship and in terms of ideology. With '9' Rice shows that you can't please all of the people all of the time, but, by producing an album that will frustrate and fulfil people in equal measure, you can still create an excellent piece of work.