A review of his album 'Stay Loose' 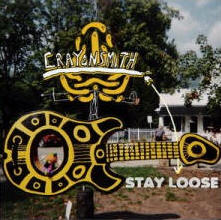 Review Snapshot:
A sauntering collection of ten indie pop tunes that come alive in your headphones with colour, imagination and charm.

Full Review:
Ciaran Smith, a.k.a. Crayonsmith, creates adventurous indie pop music that warms the senses. Released on the Musical Voodoo Label, this, his debut album, cascades along with an enchanting ambience that gets right under the skin. It is an album designed to catch the listener off-guard and lure them in closer with its textured melodies and lush harmonies.

Opening with the excellent 'Drunken Smile', Smith's soft vocals stand out straight away. He sings like someone who has grown up listening to The Beach Boys and Neil Young but would now be more influenced by a band like Joy Zipper. It's quite a likeable voice. The music itself has a hint of Pavement and Beck to it, but there is enough originality running through to keep his sound fresh and inventive.

As the album starts to spin, a charisma emerges through Smith's songwriting and musicianship. It comes in the form of a mellow aftertaste that leaves the listener wanting more. Tracks like 'Lock-In' and 'Scarytale' perfectly reveal this with their well-timed injections of colour and imagination. Aided by a cabal of indie mechanics (most notably John Cowhie a.k.a. Goodtime John), 'Stay Loose' never feels like Smith is on his own. There are backing vocals, drums, keys, bass and plenty of humming happening in the background throughout its thirty-three minute duration.

Working like a musical surgeon - hurriedly connecting, disconnecting and reconnecting parts in order for them to fit in the right place - Smith delicately balances an indie pop assuredness with electronic leanings. He chooses to keep things simple and to make sure that the flow of the album is never disturbed. This in turn makes 'Stay Loose' a cascading adventure that introduces the listener to the exciting talent of Crayonsmith.