A review of their album 'Invisible Invasion' 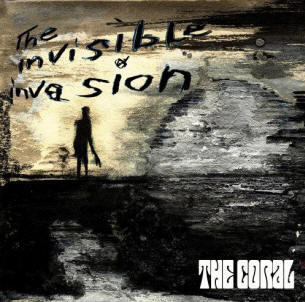 Review Snapshot:
A decent album, very good in parts, too damn similar in others, this is probably going to end up as one of those extra CDs in the collection. Definitely not rack-of-shame material, but I can't see it making heavy rotation. Unfulfilled.

Full review:
Well, can The Coral finally fulfil their promise and produce a great album, not just a catchy collection of songs? They've always had good tunes, the talent is evidently there, but it's never quite come together on long play for the Liverpudlian troubadours. You could almost say that up to now they've been stuck in a time warp of the Beatles' early catalogue, so, can they make the jump? Will this be their Help or Rubber Soul?

Invisible Invasion is The Coral's fourth album, (3rd if you discount the kinda long EP that was Night Freak and the Sons of Becker) and early signs are definitely good. First single 'In The Morning' is one hell of a pop song, so goddam sunny! It really is one of those carefree summer tunes, be it chilling with a frisbee in the park, or sitting out on those late nights with no work worries.

Unfortunately however, first impressions of the album aren't that great. Sure it's a slightly more advanced sound, but there is no real progression? yet (I'm still keeping my fingers crossed). Invisible Invasion is a collection of pretty good tunes, I like it, and it's probably the best of the four albums, but I still feel a little let down, pedantic bitch that I am.

I think The Coral have a great album in them, but they need something to shake them up, and this album merely stirs their sonic palette. Maybe they need a trip to Burning Man, Marrakesh, or Kathmandu, who knows. One thing is for certain though, they need to get out of Liverpool and live a little. Until then, I get the feeling that the next four albums could be as unfulfilled as this one.

As I see it there are pretty much two types of Coral songs. The bouncy, bass driven pop that they have made their own, and the more darkly psychedelic (see 'She Sings the Mourning', 'A Warning to the Curious').

'So Long Ago' and 'In the Morning' are definitely of the first type, and they make for more casual, radio style tunes. The other selections are what flesh out the album, and make for a more interesting listen. Kind of surreal and otherworldly, most are well crafted, catchy and sport a few surprises. The Coral never give in to the trappings of psychedelia though, you won't hear any raging extended guitar or xylophone solos. It's all about the song, which stays comfortably around the three minute mark.

If you've only heard The Coral on the radio and want to get interested Invisible Invasion is definitely the place to start. It's their most complete album to date and an enjoyable listen. I'd love them to step out of their mould a little though?