A review of their EP 'When I get there' 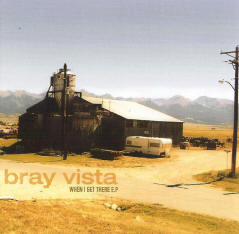 Review Snapshot:
Bray Vista's "When I Get There" is an important release in Irish music terms since it is representative of the first, new flowering of the alt-country movement on these shores since the demise of the critically acclaimed - but commercially underachieving - Stars of Heaven. Bray Vista's sound is clearly influenced by the work of Texan singer/songwriter Lyle Lovett but this three song EP distinguishes itself thanks to the group's gorgeous, confident playing and Karl Odlum's smooth, creamy production.

Full review:
The Irish are prime originators of the genre we know today as Country Music. In fact, one of the cornerstones of our influence is very old Irish ballad called 'The Bard of Armagh'. As the song travelled with Irish emigrants, first to England and then to America, the lyrics, but not the melody, were adapted to fit the tastes of local audiences. In 1876, an Iowa born cowboy called Francis Henry Maynard wrote a new set of lyrics to the tune and the ballad was re-titled 'The Cowboys Lament'. In time the song took its popular name from Maynard's first line, "As I walked out in the streets of Laredo".

So it shouldn't come as a surprise to anyone when a group of young Irish musicians decide that they are going to, "re-ignite the muted embers of Irish country", and wrestle the music back from the clutches of what they describe as a bunch of mustachioed, denim-clad line dancers. And that, not to put too fine a point on it, is what Wicklow based Alt-Country neuf-tet Bray Vista aim to do with their 2004 EP release, 'When I Get There'.

I have to say that I don't think that Irish country music needs any re-igniting at the moment. In fact, it has never been in a healthier state. Veteran Bluegrass musician Niall Toner has recently be nominated for a CMA award, Phillip Donnelly is back on the Auld Sod after a very successful period in Nashville and Maura O'Connell has just released a wonderful new album on the Sugar Hill label that continues her collaborative relationship with Jerry Douglas. Even so, I think that 'When I Get There' is an important release in Irish music terms since it is representative of the first, new flowering of the alt-country movement on these shores since the demise of the critically acclaimed but commercially underachieving Stars of Heaven.

Bray Vista claim Willie Nelson and Johnny Cash as influences but to my ears their laidback sound owes more to the Texas tradition of artists like Don Walser and Lyle Lovett than it does to the raw, rough twangs of the Outlaws. In fact, I think that Lovett is the single strongest influence on both the song writing and the playing of the group. Certainly, Lovett's breakthrough 1986 record 'Lyle Lovett', which was recorded in Arizona and co-produced by the legendary Tony Brown, is a key work of the New Traditionalist movement and the soft, subdued arrangements that he used to accompany his voice have been much emulated by a number of alt-country acts that appeared in his wake. Indeed, the singing of Bray Vista's lead vocalist Neil Tobin is uncannily like Lovett's own gentle, yodeling drawl, particularly on 'The River That Knows'.

I greatly admired Bray Vista's gorgeous, confident playing and Karl Odlum's smooth, creamy production although I was puzzled as to why all three songs on this record were composed solely by Tobin. Tobin is certainly a promising songwriter with an ear for a good tune but I found the impact of 'The River That Knows', with its luscious swooping chorus, lessened somewhat by the following two cuts, which added little to that first statement. Don't get me wrong, writing a good song is an exceptionally tough task and writing a good song that is popular with the public is even more difficult. No one knows this better than the denizens of Nashville, which is why a tradition has developed over the years on Music Row that the song is king, the song comes first and all that matters to the artist who records it is that it becomes a hit. Country artists don't get as hung up over who wrote what as rock musicians do. They aren't trying to be auteurs like Bob Dylan. They know that George Jones wrote practically none of his output. They just want to be Number One. It is a tradition with a long history since even Hank William recorded songs by artists such as Leon Payne as well as co-writing with musicians such as Moon Mullican. And there is no guarantee that your biggest hit will even be written by you. Saul Holiff once observed that Johnny Cash's own song 'I Walk The Line' made Cash a star but it was Shel Silverstein's 'A Boy Named Sue' that made him a superstar. Today, many major country artists such as Tim McGraw do not write any of their own material and those that do, such as Toby Keith, tend to write in partnership with another songwriter. Even exceptional solo songwriters such as Alan Jackson and Josh Turner fill out their albums with compositions by other artists. So, Tobin's desire to fill this record with his own material does not strike me as keeping with the classic traditions of what the group describe as "old time country music".

My one real misgiving about Bray Vista is that I have a sneaking suspicion they want to be seen as 'cool' for their championing of Country Music. In the press release that accompanied my copy of 'When I Get There', the band describes themselves as, "more Bruce than Daniel", which is fine except that Bruce (Springsteen) is not actually a country musician, Kid Rock is more country than he is, whilst Daniel (O'Donnell) is highly respected in Nashville after working with both Loretta Lynn and The Jordanaires. Barbara Mandrell scored a hit in 1981 with a tune entitled, "I Was Country When Country Wasn't Cool". The song's message is summed up in the following couplet, "I took a lot of kiddin', 'cause I never did fit in / Now look at everybody tryin' to be what I was then / I was Country, when Country wasn't cool". Somehow, I feel that Mandrell's wry assessment of the hip convert to country music is also applicable to the Tobin gang.

Bray Vista are to be commended for bringing their brand of twang to what they describe as "unsuspecting audiences" but it is still a lonely path that this gang of nine have chosen to follow. Dublin is not the Ground Zero of Irish county music, as the financiers of Dublin's Country 106.8 FM will unhappily tell you. Galway, Donegal, and Kerry are much better stamping grounds for the aspiring twangster than Dun Laoire or Greystones and are much kinder to those that choose to play them. These rain swept heartlands have given successful careers to many traditional Irish county stars such as Daniel O'Donnell and Dominic Kirwan in much the same way that Midnight at the Olympia has helped to destroy highly touted acts such as The Fleadh Cowboys. At some point, Bray Vista may have to choose between the fickle, unsuspecting hipsters of Whelan's and the loyal, erudite housewives of the Hazel Hotel in Monasterevin. After all, Johnny Cash may have played The Viper Room in L.A but he never forgot the shopping malls of Wichita.

I hope that Bray Vista achieve the same blend of success, but then, no one ever said that country music was about easy choices or happy endings.