Review of the compilation 'Beyond Mississippi: The Blues That Left Town' 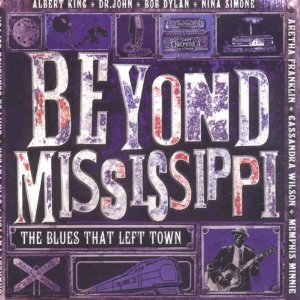 It's not like we need another blues collection. Supermarket shelves and music shop bargain bins are heavy with a mainstay of this music industry quick-buck: the cheap and cheerful name check of likely characters of a particular genre. All the staples, the clich? and the stereotypes get pulled out of the bag - the golden oldies of the style - making good company for a long distance truck driver perhaps.

But then an imaginative record company comes along and tears up the industry hand-book to create a remarkable album. That company is the UK-based Union Square Records and what they done with this two-cd package is more John Kelly's Mystery Train than Tony Fenton populismo. Where Union Square excel is in digging through the vaults to find the more forgotten artists as well as the very famous doing forgotten and unconventional blues-based things. Thus there's a prison recording of Billie Holiday-sounding prison inmate Odea Matthews doing a scratchy but compelling 'Something Within Me', to the accompaniment of her prison-labour sewing machine: the first time such a contraption has ever counted as an instrument the tightly written and enlightening inlet notes tell us. From a 1930s hard-scrabble prison we move to a 1960s London studio and a young Van Morrison's 'Who Drove the Red Sports Car'. Mississippi? seeks to highlight the lost and often hidden links between some of the world's most mainstream and celebrated artists and the blues, the birth mother of rock and popular music.

Surprisingly there's no Rolling Stones here - but perhaps their dues to the blues are obvious enough. Neither is it necessary to name-check blues guitar master Eric Clapton: rather his influencers and sometimes-collaborators are here instead. Bigger than Clapton, and more enlightening for its presence here, is a blistering Bob Dylan with 'Dirt Road Blues', atop of the track listings on CD 2. Unlike Morrison with whom he has often collaborated, Dylan never wore his blues credentials on his sleeve, more captivated by the folkery of Woody Guthrie and the Clancy Brothers than Muddy Waters or Robert Johnson. (Incidentally Guthrie is here too, guesting on Sonny Terry's 'Rain Crow Bill', thus it all makes sense). Now at the twilight of his career the man has come around and he sounds positively Mississippean on this crackling, blazing track from 1997. The blues, and Dylan, have rarely sounded so good.

Beck is out-Becked meanwhile on the sublime and mind-twisting Little Axe number 'All Night Party'. Perhaps the youngest act on the whole recording, Little Axe has created a marvellous tribute to the blues with his cut and paste of old blues artist into a groovy House beat. Messrs Hanson and Moby have very potent competition here.

The esoteric is meanwhile represented by a bunch of legendary eccentric Brits, the Bonzo Dog Band, a kind of Jools Holland but with more intelligent humour. 'Can A Blue Man Sing The Whites' remains a fine slice of musical competence while maintaining its belly-tickling satire of Viv Stanshall's lyrics. More serious and orthodox perhaps is 'Death Do Have No Mercy', a dirge-ful wonder by Rev Gary Davis whose vocal intensity and guitar virtuosity combine uniquely with his Gospel background to brew up something nearly sinful in its soul-tugging power.

This is the only record needed by anyone seeking to ascertain the value and influence of the blues to modern music.