A review of their album 'Down In Albion' 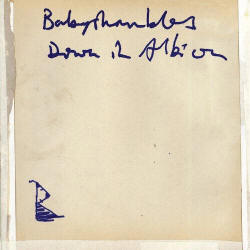 Review Snapshot: Fortunately for Pete Doherty, his music tends to be slightly more interesting than his infant terrible rampages - and that's saying something. Can he win more than the hardcore over with Babyshambles' debut?

Full Review:
The time is now. After more than a year of sporadic releases, a few hits in the form of 'Kilamanjero' and 'Fuck Forever', Babyshambles finally get themselves together for long enough to get the album out. The record is based loosely around a tragic fall from romantic grace of the album's main character ('La B?e', a disguise that slips from lead singer Pete Doherty) and set in the fictional land Doherty and former Libertine partner created - Arcadia / Albion, whatever you're drinking - a cracked up Narnia, where poets and lovers reign wielding the politics of guitars. The first four tracks are neck-breakingly attention-grabbing. 'La Belle Et La B?e', opens like the soundtrack to an action sequence in a 1930s horror flick. The tragedy of love - and tragedy full stop (.) - drive the record. Doherty's girlfriend duets on the track, whispering "Is she more beautiful than me?" and Doherty goes on wail forebodingly that he "I can't tell between death and glory" on the standout song 'Fuck Forever', by now an anthem for the disenchanted, that nets the spirit of Doherty and his ability to make indifference angry and, ultimately, self-destructive.

The poppy and elevating 'A Rebours' and 'The 32nd of December' will be a surprise to anyone who presumes Babyshambles specialise in downcast moaning. Doherty has taken the shining upbeat slivers of The Libertines with him, but references to crack cocaine occasionally bludgeon the listener like a badly written press release. At least on The Libertines' 'Can't Stand Me Now' there was some humour in the line "If you pipe all some long / then get forgiven in a song / that's a touch my lad." On 'Pipedown', the band almost camp it up, with a raucous grungy crack struggle.

There are, naturally, a few dodgy intervals. 'Pentonville', a scrawled demo about Doherty's time inside spoken by a Rasta he met in the prison is almost embarrassing. But it's simultaneously admirable to allocate a track - on what will probably be a chart album - to a talentless convict (the Rasta, that is). The record, punctuated with such individuality, is not only a scorn of the norm but reflects complete apathy at the "what's everyone else doing?" attitude. 'Sticks And Stones' is badly constructed and 'Albion', which was a beautiful wandering epic live, has had a lot of its soul stripped in production.

The record is really driven by the four beautifully constructed songs that open the record, creating his own sound only in their diversity. After that, it tends to wander around a bit, fall over and then get a 14th wind, before another distraction mutes what could be truly good. That said, 'Albion' and 'Kilamanjero' save grace. The real surprise for the uninitiated is the attention to melody, harmony and the intent to compose every track as distinct and separate to what went before.

'Down In Albion' is a brave, unsurprisingly shambolic and distinctive record, but ultimately one would expect more spark from the man some call the spokesman for a generation.