A review of their album 'Sung Tongs'

Strange is not the word, but then it's hard to know what word to use when it comes to the slightly puzzling musical beast that is Animal Collective. Loosely based around two New Yorkonians and signed to the ultra-hip Fat Cat Records, their latest record might be their most accessible to date but it's still unlikely to raise them above the status of critically-loved (deep)
underground darlings. 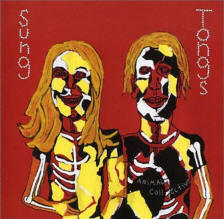 The musical backdrop involves twin acoustic guitar strumming, aided and abetted by organic-sounding electronica. But it's the voices of the rather improbably named Panda Bear and Avey Tare that provide the real core of the songs. Sometimes their melodies sound like some sort of hippie vocal therapy exercise; silent and breathy here, a spot of tribal chanting
there, sounding for all the world like a flock of seagulls elsewhere. 'Leaf House', one of the most immediate tracks on the album, features two voices singing "meow" in unison as another whispers "Here kitty kitty".

You could probably call it 'prog-folk' and try to explain that it sounds a bit like Syd Barrett playing with Simon and Garfunkel, but their sound is pretty much unique. When it works it's enchanting, intriguing and - despite the oddness - sounds like the most natural thing in the world. Songs like 'Winter's Love' are just beautiful, never obvious and seem to pluck endless ideas and harmonies (at times reminiscent of the wordless melodies of Sigur Ros) out of thin air. It's 'fresh air' during the headphones-hour kind of stuff, and makes you think that anyone who bothers with such trifles as coherent lyrics, ordinary singing and conventional song structure must be just plain boring.

But the sheer madcap-edness of it all just gets a bit much at times. 'Sweet Road' represents them at their most pop but they cut it short after a minute and head into the sonic forest of album centrepiece 'Visiting Friends', which sounds like an acoustic Kid A with the tree things from 'Lord of the Rings' talking over the top. And which definitely becomes hard work by
the time you get to the end of its twelve minutes. It just doesn't seem rewarding enough to get puzzled over. Or maybe I just need better drugs (socially responsible disclaimer: CLUAS is a good-natured community-driven site that does not in any way encourage taking of illegal narcotics).

Nevertheless, if you seek a sonic experience with a difference then you could do worse than let Animal Collective welcome you into their jungle.