A review of their album 'Oulaw' 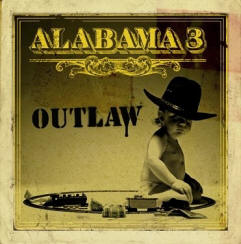 Full Review:
In 1975, 'Outlaw' country artist Waylon Jennings had a hit with a song entitled, 'Are You Sure Hank Done It This Way', in which he posed a pertinent question about the state of country music at the time, "It's the same old tune / Fiddle and guitar / Where do we take it from here?" In 1999, Clint Black re-recorded the song as, 'Are you sure Waylon done it this way', but the opening couplet remained the same, a clear sign that, even in the eyes of one of its most traditional practitioners, little had changed stylistically in country music over the intervening twenty four years.

It is not a problem that is unique to Nashville, American jazz has also struggled artistically in the last few decades. A new book by Stuart Nicholson, 'Is jazz Dead?: Or Has It Moved to a New Address', argues that Jazz as an art form is now extinct in America, having previously re-located to European countries like Sweden and Norway where it developed to the extent that jazz audiences in those countries are no longer really interested in hearing what American jazz musicians are doing. Indeed, when English saxophonist Courtney Pine played the Cork jazz Festival during his own "Jazz is Classical Musical" phase, members of the audience actually walked out in boredom, the thud of their emptying seats forcing Pine to completely rethink what jazz was and how he should approach it.

In a similar way, the real innovators in country music are now emerging, not from Lubbock but from London, where labels like Loose Music and artists like Matt Johnson are re-imagining what country music can and should be. Pre-eminent among these mould breaking twangsters are the good ole boys of Alabama 3 who hail from the outlaw territory of Brixton yet whose song, 'Woke Up This Morning (Chosen One Mix)', became the theme tune for one of America's most iconic drama serials, 'The Sopranos'. Ever since the release of their 1997 debut, 'Exile on Coldharbour Lane', this band of desperados have successfully cut country music with acid house to produce songs such as, 'Woody Guthrie', and, 'Speed Up The Sound of Loneliness', which transports John Prine's original tune from the Bluebird Caf?to the Brixton Academy.

They must enjoy their high profile association with New Jersey's most famous television gangster because they have now returned with, 'Outlaw', an album devoted to outlaws of all shapes and sizes, from guitar picking outlaw Johnny Cash to pistol brandishing outlaw Bruce Richard Reynolds, the mastermind behind the Glasgow-Euston Train Robbery.

The inspiration for the project came from a picturesque conversation that band co-founder Rob Spragg (Larry Love) had with Bruce Reynolds at a literary festival in Clerkenwell. It occurred to Love that whilst the US had a tradition of outlaw music; England had been more reticent to mythologize its outlaw fraternity in song, although, to be fair, the Great Train Robbery isn't virgin territory for English musicians, having previously inspired both The Sex Pistols and, eh, Phil Collins.

Not surprisingly, the centrepiece of the album is the track, 'Have You See Bruce Richard Reynolds', which turns the J O'Connor penned English folk song immortalising the robbery into a slide guitar stomp, complete with a monologue by the gravel voiced Reynolds himself detailing the development of railroad larceny ever since that first heist in Seymour, Indiana in 1866 by the Reno Brothers. You gotta hand it to Reynolds, a former antiques dealer; he does have a sense of history and the album is worth buying just to hear him say, "The Wild Bunch".

Trains are a recurring theme on, 'Outlaw', in songs such as 'Last Train to Mashville', as is the influence of another railroad balladeer, the late Johnny Cash who is eulogised in the song, "Hello?I'm Johnny Cash', which cleverly works the titles of many of his most famous songs such as 'Delia', 'Jackson' and 'Folsom Prison Blues', into the lyrics. The band also incorporate the Man in Black's trademark boom/chicka/boom drum pattern - an imitation of the sound of a moving train - into the groove of the song. Indeed, so recognisable a part of Cash's musical style was this rhythm that, when Jawbone recorded, 'When The Man Comes Around', for a Johnny Cash tribute CD released by MOJO Magazine in 2004, they reinstated it even though Cash did not use bass and drums on his own recording of the song in 2002, limiting himself to organ and acoustic guitar instead.

The myriad influences that colour this album come together on the closing track, the redemptive, 'The Gospel Train', which cleverly employs a sample from Dylan's Nashville era, "Lay Lady Lay", itself an example of Cash's influence on another artist, to give the band their own version of, 'People Get Ready'.

You know, on paper, country music which is written and performed by Europeans shouldn't work: it certainly doesn't when it is attempted by Hank Wangford, but that ignores the historic fact that American roots music is, in part, European in origin. Alabama 3 are, in many ways, just bringing it all back home and, in the process, reminding us that country music is something you can dance to. On 'Outlaw', it sounds like this firm of outlaws have succeeded, a view shared by Bruce Reynolds who ends his liner notes for the album with the words, "I think, as a former outlaw myself, that Alabama 3 is the best outlaw band there is today". 'Nuff said.