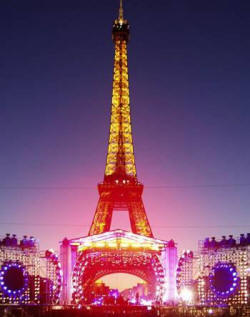 If France made any international headlines in 2005 it was probably for things like the suburban rioting in Paris, Zinedine Zidane returning to single-handedly drag les bleus to the World Cup finals, or even the world's first face transplant (as you can imagine, these events were over-exaggerated. Buy me a drink sometime and I'll tell you what really happened).

French music, though, didn't exactly capture the global imagination. The most successful French act in 2005 was probably Daft Punk, who could already rely on an established worldwide fanbase to buy their latest album "Human After All". I had expected that the French media would be fizzing with hype about the new release by one of the country's few internationally-renowned acts. In fact, the record was greeted by tumbleweed rolling down deserted boulevards - an apathetic reception which wasn't helped by the record itself being only so-so. Still, the single 'Robot Rock' was a slight but enjoyable piece of dumb fun.

As it happened, the best Daft Punk record of the year was 'Daft Punk Is Playing At My House' by LCD Soundsystem (from New York), a track acknowledging the continuing worldwide influence of Parisian electronica. Sebastien Tellier, picking up air- and floor-play with his track 'La Ritournelle', looks set to consolidate France's position as market leader of soundtrack music for the wine bars and boutiques of the world. Bob Sinclair, the alter ego of a Parisian DJ called Chris The French Kiss, also enjoyed an international hit with the cheesy 'Love Generation'.

So, has there been anything else of merit from the vintage of deux mille cinq? Well, based on the proven scientific method of remembering what I've been singing in the shower en fran?is this year, here are some of the best French singles of the last twelve months. Guitar rock is notably absent because the current crop of French guitar acts - I think of Louise Attaque, M, Kyo, La Grande Sophie and Mickey 3-D - aspire to sounding like the Stereophonics. Enough said. By contrast, you may want to check out the following:

Check out the first instalment of Aidan's 'French Letter column' where he reflects on the Rock Scene in France.