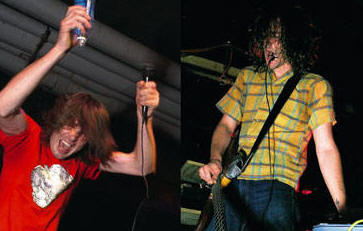 Review Snapshot:
Fancy coming for a cacophony? Wolf Eyes will loosen your fillings with a melange of dirt pool electonic debasements, industrial blare, and shouting. Give your ear drums the night off.

Full review:
Sonic terrorists Wolf Eyes enjoy a racket. They peddle a strange brew of industrial noise carried out with bastardized instruments and various electronic din machines. Going to their gig presents you with a dilemma; how do you have your fingers in your ears and scratch your chin at the same time?

It's easy to dismiss as total rubbish. Readers of The Wire may froth at the mouth but listening to a broken refrigerator being sodomised by Tetsu the Iron Man, isn't everyone's cup of tea. But there's something visceral about listening to it live that goes beyond the narrow parameters of what's good and what's not. It batters you into submission. Frankly it would give me immense pleasure if Wolf Eyes stepped in to replace U2 at one of their impending enormodome ejaculations. There would be riots, admittedly, but at least they would be perfectly soundtracked.

So the Whelan's crowd braced itself for a right clatter. They weren't disappointed. The three blare-meisters began with some tentative drones, a big cymbal and a small cymbal, and the odd bit of static. Then the noiseniks began to commit acts of GBH on a plethora of instruments and machines. A saxophone appeared intermittently. I think one guy was playing a George Foreman grill. The singer made the kind of sounds you might replicate if you had just woken up and realized you'd defecated all over your parents' bed. It was thrilling. There were moments where you couldn't help but be reduced to a catatonic frenzy.

Then it was over. After about a half hour one of the guys said "we've got no more stuff'. The crowd wasn't having it. So they played one of the tunes they had played already. And then it was over. Not an especially good return for fifteen quid.

Somehow Wolf Eyes manage to combine being repellent and wonderful at the same time. Better men than me have tried, and failed, to justify their existence, but I do think it's a good thing that we have artists that challenge the oppressive musical orthodoxy foistered onto us. What is hard to tell though, is if people really like Wolf Eyes or like the idea that they like Wolf Eyes. That said, if I was to pick one band to re-interpret the 'I'm Loving It' tune for the next McDonalds ad campaign, it would be them.